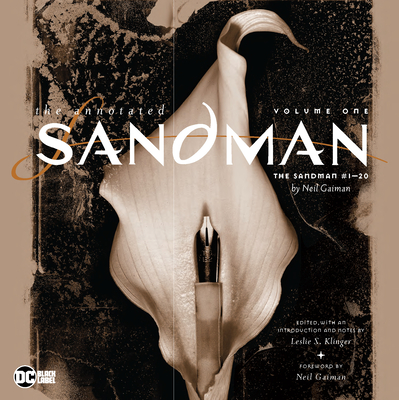 A journey through Neil Gaiman’s THE SANDMAN with commentary, historical and contemporary references, hidden meanings and more, presented side-by-side with the series' art and text.


THE ANNOTATED SANDMAN is an In-depth, informative, entertaining and fascinating look at the New York Times best-selling series by Neil Gaiman. Edited by and with an introduction and notes by Leslie S. Klinger, the expert researcher and editor behind the Edgar®-winning New Annotated Sherlock Holmes and the critically acclaimed New Annotated Dracula, THE ANNOTATED SANDMAN is a panel-by-panel journey through every issue of THE SANDMAN. Beginning with issues #1-#20, this volume provides commentary, historical and contemporary references, hidden meanings and more, presented side-by-side with the series' art and text. Using scripts and hours of conversation with Gaiman, Klinger reveals fascinating details of THE SANDMAN's hundreds of unforgettable characters and its place in literary history.The first of an incredible four volume series, the ANNOTATED SANDMAN Vol. 1 is a must-have for every Sandman fan!

Creator of The Sandman and one of comics' most accomplished writers, Neil Gaiman is also the New York Times bestselling author of the novels Anansi Boys, American Gods, Stardust, and Coraline, as well as the short story collections M Is for Magic and Smoke and Mirrors and the multimedia creation Neverwhere. He also co-wrote the Jim Henson Productions film MirrorMask with longtime collaborator Dave McKean, illustrator of the Gaiman-written graphic novels Mr. Punch, Violent Cases, and Black Orchid. Among his many awards are the Hugo, the Nebula, the Eisner, the Harvey, the Bram Stoker, and the World Fantasy Award. Originally from England, Gaiman now lives in the United States.