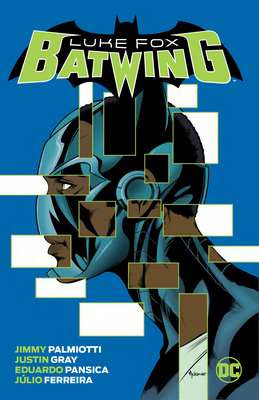 Once a member of Batman Incorporated and deputized by the Dark Knight himself, Batwing, the Batman of Africa, has quit. Luke Fox, the son of Bruce Wayne’s trusted ally Lucius Fox, has emerged in his place...but will his actions do more harm than good in Gotham City?

Writers Jimmy Palmiotti and Justin Gray and artist Eduardo Pansica blaze a fresh new start for the armored vigilante who helps Batman protect the streets of Gotham from the forces of evil. The new hero is put to the test with new challenges and threats as he comes face to face with Lady Vic and Charlie Caligula and confronts the Darklings and Anubis clans that live below the city, unbeknownst to the Gothamites above them.

He is the co-founder of such companies as Event Comics, Trio Entertainment, Black Bull Media, and the current Paperfilms, where he partners with Amanda Conner and Justin Gray. Together they have created and co-created numerous universes, comics, TV series, and characters including The New West, Monolith, 21 Down, The Resistance, The Pro, Gatecrasher, Beautiful Killer, Ash, Cloudburst, Trigger Girl 6, Thrill Seeker, Trailblazer, Ballerina, The Twilight Experiment, and Painkiller Jane.