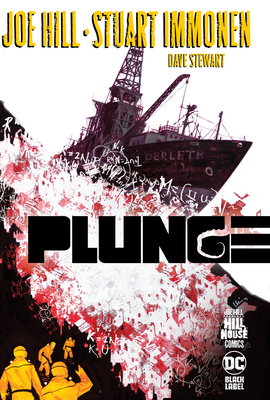 By Joe Hill, Stuart Immonen (Illustrator)
$24.99
On Our Shelves Now

In 1983, a state-of-the-art drilling ship, the Derleth, vanished near the Arctic Circle. Decades later, it has begun sending a distress call...

Tracing the signal to a remote atoll in the Bering Strait, the Rococo oil company hires the Carpenter brothers and their salvage crew to investigate the ghost ship. Joined by a marine biologist and an oil executive, the brothers set out on a grim mission to learn what caused the disappearance and recover the bodies of the crew...only to find that the Derleth's men aren't dead! Even if they're also not quite...alive...anymore.

A surreal and gory celebration of '80s horror, Plunge brings together Joe Hill (NOS4A2, Locke & Key) and Stuart Immonen (The Amazing Spider-Man, Superman: Secret Identity) for a deep dive into unfathomable terrors. Collects the six-issue miniseries along with exclusive commentary and sketches.

Joe Hill is the #1 New York Times bestselling author of The Fireman and Heart-Shaped Box. His second novel, Horns, was made into a feature film starring Daniel Radcliffe; his third, NOS4A2, is forthcoming as a TV series from AMC. His book of short stories, 20th Century Ghosts, won the Bram Stoker Award and British Fantasy Award for Best Collection. His most recent work, Strange Weather, a collection of novellas, was published in the autumn of 2017. He earned the Eisner Award for Best Writer for his long-running comic book series Locke & Key, featuring the eye-popping art of Gabriel Rodriguez. Look for that one as a Netflix show in the not-too-distant future.