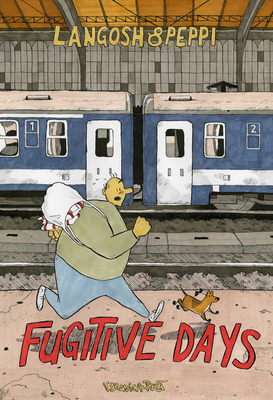 This debut graphic novel tells the story of the 2015 European "migrant crisis" in Budapest, Hungary through the perspective of Langosh and Peppi, a vagabond and his faithful dog. The pair brings to mind an older, down-on-their-luck Tintin and Snowy with adventures to match. A semi-autobiographical work based on Post's own experiences, Langosh and Peppi escape the pressures of conformity by exploring out-of-the-way places, where they stumble on the vestiges of the war torn region's hidden past. We follow them through streets, alleys, tunnels, train stations, cheap rooms, abandoned buildings and the countryside and witness the effects of various social, political and interpersonal situations through their eyes.

The story illustrates a sort of "Huckleberry Finn" existence, of travelling freely with no responsibilities except finding food and shelter, and meeting fascinating people along the way. However, Langosh and Peppi soon discover the stark difference between choosing a transient lifestyle, and being forced from one's home and country. We meet people whose tragic personal struggles are enmeshed with the national struggles that continue to divide and destroy so many lives, see families torn apart due to ignorance and fear, and witness the disturbing global rise of nationalism. Influenced by Hideo Azuma, Joe Sacco, and Julie Doucet, Post examines the modern dilemma of what it means to be human and to call a place home.