The Customer is Always Wrong (Hardcover) 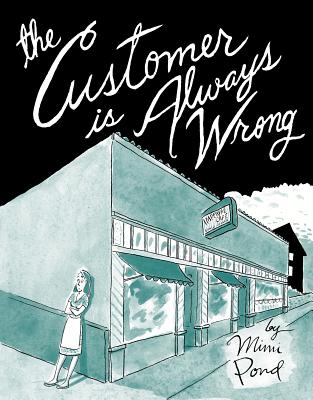 The Customer is Always Wrong is the saga of a young naïve artist named Madge working in a restaurant of charming drunks, junkies, thieves, and creeps. Oakland in the late seventies is a cheap and quirky haven for eccentrics and Mimi Pond folds the tales of the fascinating sleaze-ball characters that surround young Madge into her workaday waitressing life. Outrageous and loving tributes and takedowns of her co-workers and satellites of the Imperial Cafe create a snapshot of a time in Madge’s life where she encounters who she is, and who she is not.

Told in the same brash yet earnest style as her previous memoir Over Easy, Pond’s storytelling gifts have never been stronger than in this epic, comedic, standalone graphic novel. Madge is right back at the Imperial with its great coffee and depraved cast, where things only get worse for her adopted greasy spoon family while her career as a cartoonist starts to take off.

Mimi Pond started her career as a cartoonist at the National Lampoon in the late 70s. In the years following, she wrote and illustrated five humor books and contributed regularly to dozens of national magazines and newspapers, including the Los Angeles Times. In 2014, she published the first part of her coming of age memoir, Over Easy. She lives in Los Angeles with her husband—the painter Wayne White.

"Sharp and ambitious... If Pond’s last book was a sitcom, The Customer is Always Wrong would be an HBO drama with a Sunday night time slot."—Jezebel

"The sobering wake-up call to naive nostalgia... [The Customer Is Always Wrong offers] a look at the end of a wild ride, punctuated by deeply profound moments in a time that could swallow you whole."—San Francisco Chronicle

"Mimi Pond is a treasure, one we ignore at our own risk... Her latest book — a thick, semi-autobiographical bildungsroman called The Customer Is Always Wrong — might be her greatest work to date. It’s a lengthy and detailed portrait of a young woman working at a restaurant in late-’70s Oakland and the cast of characters around her — some of them shady, some of them lovable, and all of them compelling. Pond’s hand is confident and her figure work hops balletically across the page; her facial acting is simple, but searing."—Vulture