Crossfire: Book I of The Rhidge (Paperback) 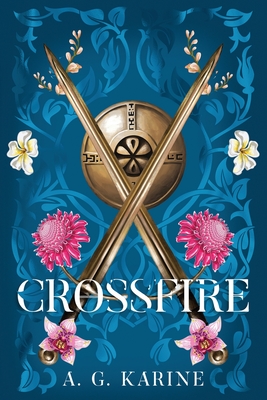 The marriage was a deal - an opportunity to rise from her family's poverty and ascend to the luxurious lordship of Lailan.

Thrust from the bleak and cold land of her youth, Gwen longs for her former life and the lover she left behind. The tropical island of her new home is ripe with challenges, expectations, and secrets. As she struggles to navigate the demands of her title, the mysteries surrounding her new husband, Lord Aedin, threaten the peaceful stability of their island.

How did a young man rise through the ranks to claim one of the Empire's most profitable islands?

And why did he marry her?

As Gwen endeavors to uncover his secrets, she becomes fearful that the answers may claim their lives. The impossible becomes reality when Gwen discovers a power she had never known to exist. But the threat of the Rhidge grows closer with each passing day... and Gwen is the perfect prey.

Meanwhile in the east, a forgotten populace struggles to accept the impending bloodshed at their shores. When a prophecy is revealed to Rowyn, the Captain of the Guard, he must respond to the call and find the young woman who will save his people.