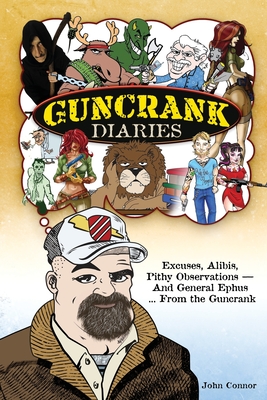 John Connor is a soldier, cop, father, lover of dogs, protector of the defenseless, guardian of what's right - and a fierce foe of what's wrong. He's fought evil, brutality and tyranny in the jungles of Vietnam, as a cop on the city streets of a major Southern California city, and in a host of god-forsaken places around the world. His friends often have very unusual names, and all remain fiercely loyal - and for very good reasons.

This book isn't about what you think, either. Not at all. It's not just simply a series of columns John wrote for the pages of American Handgunner Magazine. They're stories, yes, but each has a meaning stronger than the words on the paper convey. Each one will drag deep-rooted, powerful memories from deep within you about things that were, or might have been.

The effect this modest book will have on you won't buff out easily.

Be prepared to be changed.

What readers say about Guncrank Diaries:

"Darn it Connor, stop it-stop it-stop it... my old eyes are not as tough as they used to be. Your story of the custom colt was just wonderful. I forwarded it to my wife ... now her eyes are leaking too. so just stop it "

"I don't give a damn if the writer of Guncrank is or was a super secret special forces tacti-cool bad ass or if he was a truck driver or a mess sergeant. I like what he writes. I enjoy it because it is entertaining. And its usually just plain funny. So whoever you are thanks, I appreciate what your do or did."