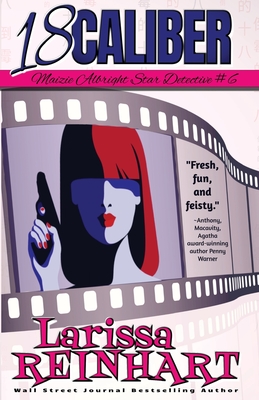 This is book number 6 in the Maizie Albright Star Detective series.

MAIZIE'S GOT ONE MOTHER OF A CASE.

Maizie's mixing with international stars, spies, and her mother's dark past in her sixth case in The Wall Street Journal bestselling series.

#WannabeSpying While ex-celebrity Maizie Albright's dreams of becoming a for-real private investigator have not exactly been dashed, they have been slightly thwarted. Her ex-manager and still-mother, Vicki Albright, has taken the helm of Nash Security Services while rebuilding her entertainment management company. Sometimes with the same clients. Like Chinese action star, Lili Liang, who's making the film Unlucky 18 in Georgia.

Thus far, Lili's living up to her movie title. Her kung fu coach is missing. Her boyfriend's disappeared. And her director, who gambled on her with the part, might be gambling with her life.

Maizie's luck is also running out. Maizie and Nash find themselves struggling to balance a new partnership and new relationship between missing persons' cases, wild goose chases, and tracking a bullet into dangerous places. Sometimes it's enough to make a girl NOT want to put a ring on it. When it comes to facing an 18-caliber killer, what will Maizie put up as the target? Her heart or her life?

A VIEW TO A CHILL

17.5 CARTRIDGES IN A PEAR TREE

Other Series by Larissa Reinhart:
A Cherry Tucker Mystery