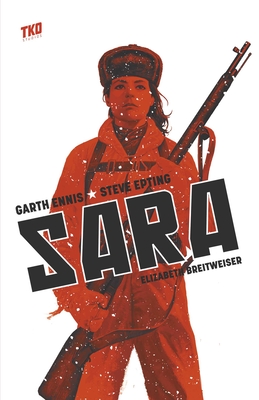 SARA is a gripping war story following a team of female Russian snipers as they beat back the Nazi invaders during a brutal winter campaign on the WWII Eastern Front.

"It's one of the best war stories that the comic book creator has put to paper." - Comicbok.com "A heartbreaking character study about what one woman will sacrifice in the name of her country." - The A.V. Club If you enjoyed Sara, check out a few other TKO Studios thrilling titles: Djeliya (written by Juni Ba) Lonesome Days, Savage Nights (written by Steve Niles and Salvatore Simeone) - named as a finalist at the 2020 Bram Stoker Awards(R) for Superior Achievement in a Graphic Novel Redfork (written by Alex Paknadel) Sara (written by Garth Ennis) Sentient (written by Jeff Lemire) - 2020 Eisner Award Nominee The Banks (written by Roxane Gay) The Pull (written by Steve Orlando) The 7 Deadly Sins (written by Tze Chun)