Battle at the Comic Expo (Paperback) 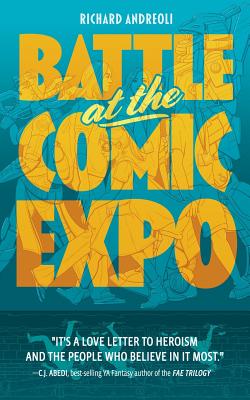 An obsessed fan is out for blood, and she's got Ron Lionel -- the most arrogant man working in comics today -- in her sights. She'll do anything to get her revenge, including destroying him and the largest comic book convention in the United States. Only one brave hero stands in her way: The head of comic-con security.

Who will survive the Battle at the Comic Expo? Find out, in the greatest action/adventure to ever cross through the multiverse and land in our world.

Ron Lionel is the hottest creator working in comic books today. His comic series, The Enduring, sells out every month and is set to become a major motion picture. Ron has no problem using his status to get what he wants, whether that be special treatment from his publisher or seducing fangirls into bed.

Joe Cotter, on the other hand, gave up his dreams of being a writer years ago, and now lives for a steady paycheck. Joe has a sense of right and wrong that was born from years of reading comics, and has long dreamed of living a more adventurous life. As the security chief for America's Finest Comic Book Expo in San Diego, he's as strong-willed as any hero with a power ring. But something in his life is missing: his purpose.

Enter Velma, an obsessed fan with some disturbing questions about The Enduring. When her righteous plan to gather answers backfires, she becomes obsessed with getting revenge against Ron Lionel. Velma sweeps the two men into a dangerous world where heroes and villains don't come from spider bites, or alien planets, or have simple backstories -- and none of them may survive the final fight.

Can the man with the mightiest ego work with the world's most immovable force to save each other and stop Velma's demented vision? Or will they end up being the catalyst that helps destroy the largest comics event in the United States?

Find out, true believer, in the epic action/adventure Battle at the Comic Expo.