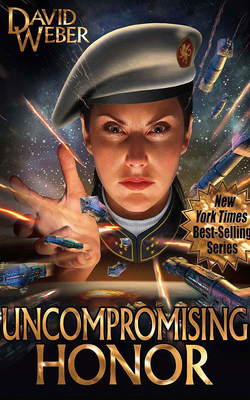 This is book number 14 in the Honor Harrington series.

The Solarian League's navy counts its superdreadnoughts by the thousands. Not even its own government knows how enormous its economy truly is. And for hundreds of years, the League has borne the banner of human civilization, been the ideal to which humanity aspires in its diaspora across the galaxy.

But the bureaucrats known as the "Mandarins," who rule today's League, are not the men and women who founded it so long ago. They are corrupt, venal, accountable to no one...and they've decided the upstart Star Kingdom of Manticore must be destroyed.

Honor Harrington has worn the Star Kingdom's uniform for half a century and served her monarch and her people well. In the course of those years, the woman the newsies call the Salamander has grown from a tactically brilliant but politically na ve junior officer to supreme fleet command and a seat on the highest military and political councils of the Grand Alliance.

Very few people know war the way Honor Harrington does. Very few have lost as many men and women, as many friends, as much family as she has. Yet despite that, hers has been a voice of caution. She knows the Mandarins and the Solarian League Navy are growing increasingly desperate as the truth of their technological inferiority sinks home, but she also knows the sheer size of the League. And she knows how its citizens will react if the Grand Alliance takes the war to the League, attacks its star systems, destroys its infrastructure...kills its civilians. Today's victory, bought on those terms, can only guarantee a future war of revenge against a resurgent Solarian League and its navy.

The League is sliding toward inglorious defeat as it steadily loses ground in the Protectorates and the Verge. As its central government teeters toward bankruptcy and even some of its core systems opt to secede in the face of the Mandarins' corruption. As the Solarian Navy finally realizes it cannot face an Alliance battle fleet and win.

But the Mandarins have embraced a desperate new strategy, and in pursuit of that strategy, the SLN has committed atrocities such as the galaxy has not known in a thousand years. The League have violated its own Eridani Edict against mass civilian casualties, violated the Deneb Accords prohibition on war crimes.

And they have finally killed too many of the people Honor Harrington loves.

Hers is the voice of caution and compromise no longer, and the galaxy is about to see something it has never imagined.

The Salamander is coming for the Solarian League, and Hell is coming in her wake.