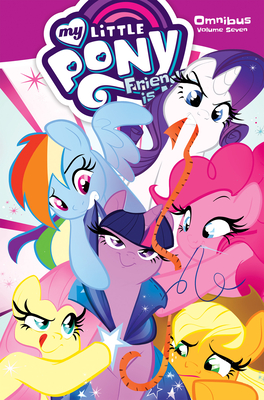 Follow the adventures of all your favorite Ponies in these tales of friendship and fun from all over Equestria in this graphic novel omnibus!

A celebration to mark the founding of Ponyville kicks things off, Pinkie Pie gets the gang together for some live-action role playing, and take a trip to the Wonderbolts Academy for Foals and Friends Weekend.

Plus, an escaped Cerberus equals quite the ruckus for our favorite fillies, especially when Princess Celestia requests a dog sitter and the task falls to Rarity! Twilight Sparkle receives a mysterious message about a missing turtle! Only it's not just any turtle--it's the most famed of racing turtles, Silver Blaze! Back at the School of Friendship it's exam time, and Ocellus has come up with an idea for a stellar project that's sure to impress all her teachers--a history of Equestria shown through her own unique Changeling abilities!

Then, Applejack helps Apple Bloom learn about the meaning of courage when she tells her sister a story about facing the biggest fear she had as a young filly: the water and when painfully shy Marble Pie tries to make friends at school, she ends up panicking and agreeing to throw a party instead!

It all ends with one of the biggest events in Equestria! Strap in, sports fans, because it's time for the Draytona Breach 500! And where there's a race, there's Rainbow Dash, ready to be trained by the most unlikely of ponies... Big Macintosh?! Meanwhile, a plunderer of ancient antiquities known as Sacks Roamer throws a wrench into the competition when he steals a priceless artifact.

Sam Maggs is a bestselling writer of books, comics, and video games. She's a Senior Writer for Insomniac Games; the author of THE FANGIRL'S GUIDE TO THE GALAXY, WONDER WOMEN, and GIRL SQUADS, all published by Quirk Books and distributed by Penguin Random House; a contributor to BioWare's ANTHEM; and she's written for comics like STAR TREK and JEM & THE HOLOGRAMS.

Thom Zahler is a graduate of the Kubert School and has worked in comics for over 15 years. He created the superhero romantic comedy Love and Capes, published by IDW, and the magical romance Warning Label for Line Webtoons. He writes and draws covers for IDW's My Little Pony series too, because he's versatile. He has also written for the Disney XD series Ultimate Spider-Man: Web Warriors and the Netflix series Knights of the Zodiac.