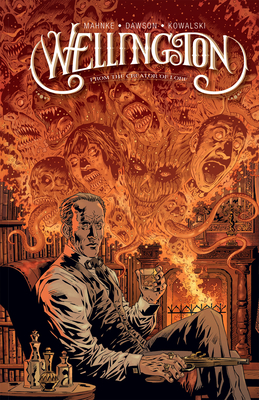 From Aaron Mahnke, the creator of Lore, comes an amazing new supernatural thriller that shines a light on the mysteries and monsters lurking in the shadows.

Meet the Duke of Wellington--one of England's most decorated military heroes and, unknown to most, her most daring monster hunter. After receiving a letter from an old flame, the Duke of Wellington heads to the countryside to investigate a series of disturbing crimes-a mysterious murder, a missing child, and a vicious black dog roaming the hills. Featuring an amazing cast of characters and calling upon centuries of supernatural myths, folktales, and lore this thrilling graphic novel reveals the secrets behind one of history's most illustrious figures.

Delilah S. Dawson is the author of: Star Wars: PHASMA, The Perfect Weapon, and Scorched; The Hit series; The Blud series; Servants of the Storm; Shadowman: Follow Me Boy; Short stories in: Hellboy, An Assortment of Horror; Carniepunk; Unbound; Last Night a Superhero Saved My Life, Three Slices, and more. Delilah is the winner of the 2015 Fantasy Book of the Year from RT Book Reviews for WAKE OF VULTURES and the 2013 Steampunk Book of the Year and May Seal of Excellence for WICKED AS SHE WANTS. Her work has earned multiple stars from Kirkus, Publishers Weekly, Booklist, and Library Journal.

Aaron Mahnke is the creator, writer, host, and producer of Lore, as well as the author of a number of supernatural thrillers. He has a deep love for anything historical, mysterious, or unusual. He stays busy writing and producing his podcasts Lore, Unobscured, and Cabinet of Curiosities, as well as working on upcoming projects and performing his podcasts for live theater audiences.

“Wellington is a fine example of gothic horror with a bit of a hook that uses a historical figure as a protagonist.” —The Brazen Bull

“Murder, mystery and creatures who mount your head on the wall oh my.” —Reading With A Flight Ring

“Good suspense, beautifully drawn. It’s like listening to a ghost story around a campfire.” —Major Spoilers