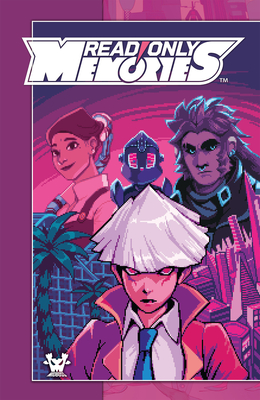 Based on the hit game, this graphic novel bridges the gap between 2064: Read Only Memories and the sequel Neurodiver!

Enter a cyberpunk universe like you've never seen before! Lexi Rivers, former detective with the Neo-San Francisco Police Department, has left the big city lights behind in favor of opening her own agency in the beach town of Santa Cruz. When a robot's human lover goes missing, Lexi will be faced with a case unlike any she's tackled yet.

Sina Grace is the author and illustrator of the autobiographical Self-Obsessed and Not My Bag, which recounts a story of retail hell. He acts as the artist for Shaun Steven Struble's cult hit, The Li'l Depressed Boy, and handles art chores along with co-writing the Image Comics hit series, Burn the Orphanage.

Grace has also done illustrations for all-ages readers, including Among the Ghosts, written by Amber Benson, and Penny Dora & the Wishing Box, written by Michael Stock. His previous works include the slice-of-life Books with Pictures, and the neo-noir urban fantasy, Cedric Hollows in Dial M for Magic. For a time, he acted as Editorial Director for Robert Kirkman's Skybound imprint at Image Comics. To date, he's worked for Marvel Comics, IDW, Boom, Dynamite, Valiant and more. His essays have appeared on several websites, most notably Thought Catalog.

"At its core, the book delivers some fine storytelling. Definitely worth picking up." —Monkeys Fighting Robots

"Effortlessly cool and immerses even first-time readers into this intriguing world." —Multiversity Comics

"Gorgeously stylized… One of the most intriguing new comics on the stands." —Monkeys Fighting Robots

"Read Only Memories is one comic you should certainly keep on your radar." —AusRetroGamer

"The beautiful visual aesthetics of the cyberpunk adventure game... have come to the comic book page." —Fanbase Press

"A positive representation of a strong, powerful woman! Final Verdict: I love it!" —Ladies Gamers