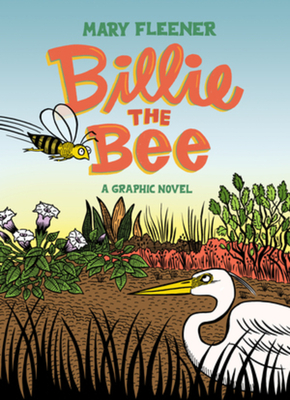 In an alternative cartoonist’s debut graphic novel, a bee and her friends must save their ecosystem!

In expressive black-and-white lines with forays into bold Cubism, Fleener tells the story of Billie the Bee, who is too big, too fast, and has far too much personality to simply collect pollen. So, the Queen Bee (with ulterior motives) sends Billie out to patrol the woodlands and marshes of San Diego for danger. She encounters a heron on hallucinogens, dirty joke-telling turtles, and humans illegally releasing vermin that will unbalance the entire ecosystem. Mixing coming-of-age graphic fiction with facts about bees and the environment, Fleener’s Billie the Bee is both a great reintroduction to a comics talent and ripped from the headlines.

Mary Fleener lives in Encinitas, CA, with her husband.

Fleener's forays into cubism make for some of the coolest-looking comics around.

Billie’s story is a quirky, pleasant take on the talking-animal book.

This enormously talented underground writer/artist returns to the drawing board for an environmentalist graphic novel about a bee beset by invaders.

On its surface, Billie the Bee is an approachable coming-of-age tale. And beneath that is a cautionary tale of the dangers in upsetting natural balances through negligence.


These cubist tableaus are the book’s real draw, hypnotically patterned and lovably trippy.

Billie the Bee is a valuable introduction to two spheres of knowledge: the ways of the bee, and the agreeable style of a total comics legend.


A welcome return for an alt-comix pioneer.