The Princess and the Fangirl (Once Upon A Con #2) (Hardcover) 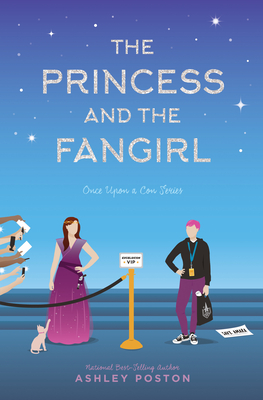 This is book number 2 in the Once Upon A Con series.

Poston’s stellar love letter to fandom continues, this time focusing on the female lead in the Starfield franchise relaunch film and one of the character’s biggest fans. Actress Jessica Stone is the opposite of lead actor Darien Freeman (romantic interest in Geekerella) – she’s no closet fan, she doesn’t “get” fandom in general. Jessica’s only interested in recreating the iconic role of Princess Amara as an acting job, one she hopes will open non-genre movie doors for her, especially following the character’s noble death at the end of the film. Superfan Imogen Lovelace is not only leading a #SaveAmara campaign, but also looks uncannily like Jessica, especially when sporting an artistic SPACE QUEEN beanie. Intrigue around the sequel’s script gives the two a reason to swap places during ExcelsiCon, leading to general con-fusion and growth opportunities for both young women. Highly recommended.

— From Nifty Novels and More from Maryelizabeth

The Prince and the Pauper gets a Geekerella-style makeover in this witty and heartfelt novel for those who believe in the magic of fandom.

Imogen Lovelace is an ordinary fangirl on an impossible mission: to save her favorite Starfield character, Princess Amara, from being killed off. On the other hand, the actress who plays Amara wouldn’t mind being axed. Jessica Stone doesn’t even like being part of the Starfield franchise—and she’s desperate to leave the intense scrutiny of fandom behind.

Though Imogen and Jess have nothing in common, they do look strangely similar to one another—and a case of mistaken identity at ExcelsiCon sets off a chain of events that will change both of their lives. When the script for the Starfield sequel leaks, with all signs pointing to Jess, she and Imogen must trade places to find the person responsible. The deal: Imogen will play Jess at her signings and panels, and Jess will help Imogen’s best friend run their booth.

But as these “princesses” race to find the script leaker—in each other’s shoes—they’re up against more than they bargained for. From the darker side of fandom to unexpected crushes, Imogen and Jess must find a way to rescue themselves from their own expectations...and redefine what it means to live happily ever after.

Ashley Poston loves dread pirates, moving castles, and starry night skies. When not geeking out at comic-cons, she lives in South Carolina with her cat named Pepper. She is the author of the Heart of Iron duology, as well as the Once Upon a Con series. She can be found online at ashposton.com.

“This lighthearted, fun, LGBT YA book dives expertly into the world of fandoms and cons.”—Buzzfeed

“A geeky love story that readers will love.”—Paste

“If you love fan culture, and love seeing it presented as how things should be, then definitely give this book a chance.”—The Mary Sue

“This companion to Geekerella reimagines The Prince and the Pauper in the best way possible: at a con!”—BookRiot

“The Princess and the Fangirl manages to take the already powerful Geekerella and build upon it in a way that makes its universe seem completely real.”—Sweety High

“A loving ode to cons, geek culture, the good and bad of fandoms, and making one's own happy ending.”— Booklist

“A fun addition to the Geekerella universe.”—School Library Journal

“Poston does a wonderful job of painting fandoms and the passion behind them.”—Foreword Reviews

“Geekerella has ‘must-read’ written all over it. A fun romantic comedy with coming-of-age sensibilities and authentically voiced teens, this novel hits all the YA book-love buttons. Geekerella is simply delightful.”—USA Today's Happy Ever After

“Fairytale and fandom collide in this sweet, heartfelt, entertaining rom-com.”—Bustle

“Pay attention, fangirls, because Ashley Poston’s Geekerella is about to be your favorite YA romance.”—Sweety High

“The geekiest spin on Cinderella you'll ever read.”—Hypable

“Geeks and non-geeks will discover their inner fangirl when they fall for this fan-tastic book that celebrates fan-doms, fan-tasy, and 'shipworthy romance’.”—Justine