In Want of a Knife: A Little Library Mystery (Hardcover) 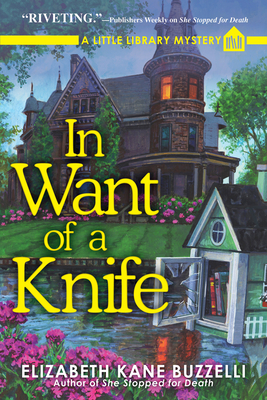 This is book number 3 in the A Little Library Mystery series.

Fans of Jane Austen will rejoice at the third Little Library mystery from Elizabeth Kane Buzzelli, In Want of a Knife.

When they investigate a string of disappearances of young girls, will Jenny Weston and Zoe Zola be dispatched with extreme pride and prejudice?

Amateur sleuth and little librarian Jenny Wilson is set on edge when the police discover a young girl’s body, dressed in an old-fashioned white lace dress, just outside Bear Falls. And when another local girl from town disappears soon after, Jenny and her next-door neighbor, author and little person Zoe Zola, know they have to help the beleaguered police chief.

But first, Jenny and Zoe have new neighbors to meet: A trio of wealthy newcomers from Chicago has just moved into a huge mansion on Lake Michigan. Nathan and Delia Wickley are genial siblings, and Fitzwilliam Dillon, the mansion’s owner, is a Little Person like Zoe. It is a truth universally acknowledged that a rich gentleman seeking to ingratiate himself to his new neighbors will spread a bit of largesse around, and Fitzwilliam is no exception: He has offered two million dollars to Bear Falls. But the townspeople are far from agreed on what to do with the money—and the deliberations are far from peaceful.

But it’ll all come to naught if the missing girl isn’t found, and the culprit identified. And when she ventures alone to a mysterious structure in the woods, Zoe may not live to resolve her romantic dilemmas. Though neither Jenny nor Zoe is particularly placid or even-tempered, love and danger beckon them in Elizabeth Kane Buzzelli’s third endearing Little Library Mystery, In Want of a Knife.

Elizabeth Kane Buzzelli lives in Mancelona, MI. She has published ten novels, one work of non-fiction, and several short stories, which have been produced onstage, read on NPR, and published in several newspapers. For many years she taught writing at the International Women’s Writing Guild summer program at Skidmore College and currently teaches at Northwestern Michigan College.

Praise for In Want of a Knife:
“A vivid portrait of small-town life [with] quirky, well-drawn...characters.”
—Booklist

“Buzzelli’s well-developed characters are the stars of the show in a complex tale that tips more than a hat to Pride and Prejudice.”
—Kirkus Reviews

“An enjoyable mix of suspense, character development, setting (the Northern Michigan woods are lovingly described), and well-assembled story...In reading, I love a surprise as much as I love a memorable character, and this novel has plenty of both.”
—Mystery Scene

Praise for She Stopped for Death:
"[A] suspenseful sequel...A riveting climax will have readers on the edge of their seats."
—Publishers Weekly

“Second in the Little Library series, this one nicely captures the feel of a summer tourist town. The backdrop of Zoe’s new book and the connection of the poetry of Emily Sutton to that of Emily Dickinson add welcome literary touches.”
—Booklist

“The friendship between Jenny Weston and her quirky next-door-neighbor Zoe Zola—as well as the inclusion of literary references—continues to be a highlight of the unique Little Library Mystery series...An enjoyable read!”
—RT Book Reviews

“The characters are interesting, and believable, which is a delight...Buzzelli sets the groundwork well, and ups the tension in the final chapters. This is the second book in the Little Library series, and good enough to make one think about finding the first.”
—Reviewing the Evidence

"An enchanting mystery with a delightful cast of characters and snappy dialogue. Book lovers are in for a real treat."
—Hannah Reed, national bestselling author of the Scottish Highlands mysteries