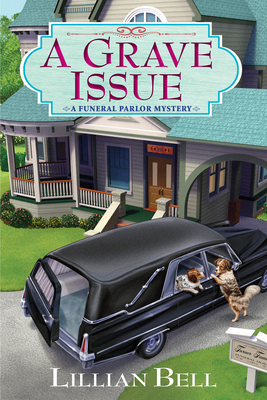 Readers of Carolyn Hart and Juliet Blackwell will be charmed by Lillian Bell’s series debut.

After an on-air gaffe goes viral and jeopardizes her career, journalist Desiree Turner retreats home to Verbena, California for some peace and quiet. She begins working one of the quietest jobs around: presiding over funerals for her great-grandfather’s funeral parlor. But the action seems to follow her as a fistfight breaks out between neighbors Rosemarie Brewer and Lola Hansen at one of the first funerals she’s in charge of running. It exposes a nasty dispute and Rosemarie’s husband, Alan, is found murdered shortly after.

Lola’s husband, Kyle, is immediately arrested. Desiree, whose own father’s death was devastating, has always viewed Kyle as a second father. Determined to clear his name, Desiree jumps head first into the investigation and quickly discovers that Alan had several unsavory habits at his job and in his personal life, including putting assets into his mistress’s account to hide them from Rosemarie. People murder for money and love all the time, and there’s no telling who he offended just enough to push them over the edge.

Desiree is looking in all the right places, but she better catch the killer fast before they come for her next in A Grave Issue, the clever series debut by Lillian Bell.

Lillian Bell was born in Dayton, Ohio. She moved when she was four and only remembers that she was born across the street from Baskin-Robbins. Lillian remembers anything that has to do with ice cream. Or chocolate. Or champagne. She recently graduated from the Creative Writing MFA program at Antioch University in Los Angeles. This is her first Funeral Parlor mystery.

Praise for A Grave Issue:
“Cozy fans will find all the right ingredients for a satisfying series.”
—Publishers Weekly

“Bell’s debut is a worthy addition to the ‘home again’ corner of the cozy world, with enough wit and moxie to warrant a return appearance.”
—Kirkus Reviews