If the Coffin Fits: A Funeral Parlor Mystery (Hardcover) 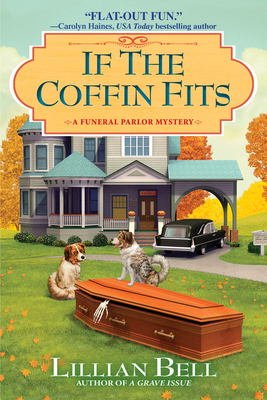 This is book number 2 in the A Funeral Parlor Mystery series.

When an unnatural cause of death finds one of her clients, Desiree must get to the bottom of the murder before she’s fitted for a coffin, herself.

Funeral director Desiree Turner deals with death by natural causes all the time. Death by unnatural causes? Not so much. Yet, she and her boyfriend Nate have heard some not-so-dear things about the recently departed. A suspicious remark by the late Frank Fiore’s daughters sparks some concern. And when Violet Daugherty faints behind the wheel of her car, Desiree suspects she’s got a front seat to murder.

Desiree can’t help but look into Violet’s untimely end, but soon after, rumors begin to spread that she’s accusing her clients of murder, which quickly spurs a mass cancellation and Desiree is on the verge of going out of business. What began as an effort to do due diligence for her client turns into a wild goose chase for Violet’s murderer. Desiree must find her proof before everything she works for is lost. But that’s easier said than done, because while everyone else in town is looking to take their business elsewhere, the killer sets sights directly upon Desiree.

Now it’s up to Desiree to find the murderer before she becomes the next body her funeral parlor serves in If the Coffin Fits, Lillian Bell’s second charming Funeral Parlor mystery.

Lillian Bell was born in Dayton, Ohio. She moved when she was four and only remembers that she was born across the street from Baskin-Robbins. Lillian remembers anything that has to do with ice cream. Or chocolate. Or champagne. She recently graduated from the Creative Writing MFA program at Antioch University in Los Angeles. This is her second Funeral Parlor mystery.

Praise for If the Coffin Fits:
“The second in Bell’s series is as lively as her first, with a quick-moving plot, a nicely crafted puzzle, and a heroine worth spending time with.”
—Kirkus Reviews

Praise for A Grave Issue:
“Bell’s debut is a worthy addition to the ‘home again’ corner of the cozy world, with enough wit and moxie to warrant a return appearance.”
—Kirkus Reviews