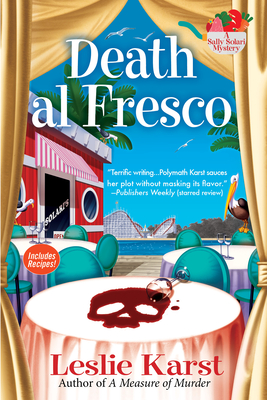 This is book number 3 in the A Sally Solari Mystery series.

It’s up to Sally Solari to serve up a killer before their family restaurant’s reputation goes up in smoke.

It’s early autumn in Santa Cruz and restaurateur Sally Solari decides an open-air painting class is the perfect way for her to learn more about Paul Gauguin, the inspiration for the restaurant she has recently inherited. But the beauty of the Monterey Bay coastline is shattered when Sally’s dog Buster sniffs out a corpse tangled up in kelp.

The body is identified as Gino, a local fisherman and a regular at Solaris’ until he disappeared after dining there a few nights before. Witnesses claim he left reeling drunk, but his waitress swears the old man only had two beers with is meal. And then the fingers begin to point at Sally’s dad for negligently allowing an inebriated customer to walk home alone at night.

From a long menu of suspects, including a cast of colorful characters who frequent the historic Santa Cruz fisherman’s wharf, Sally must serve up the tall order of clearing her father’s name in Death al Fresco, Leslie Karst’s third delectable Sally Solari mystery.

Leslie Karst has degrees in English literature, law, and culinary arts. After graduating from Stanford Law School, she worked for twenty years as a research and appellate attorney before retiring. Karst now splits her time between Santa Cruz, CA, and Hilo, HI, passing the days cooking, gardening, cycling, singing alto in the local community chorus, and of course writing.

"A tasty combination of culinary tidbits, an unusual motive for murder, and appended recipes for ambitious cooks."
—Kirkus Reviews

“Leslie Karst continues to provide colorful characters in this beautiful location, and it is always fun to see what Sally Solari will get up to next.”
—Suspense Magazine

“This is a very well-crafted murder mystery story...I’ve read all three books in this series and find myself growing more attached to the characters with each book.”
—MyShelf

Praise for A Measure of Murder:
"Engaging characters, terrific writing, and a savory blend of musical and culinary erudition...polymath Karst sauces her plot without masking its flavor. And she’s a dab hand with the red herrings."

“A mystery that rings true and features several unexpected twists along with the appended recipes that are de rigueur for culinary cozies.”
—Kirkus Reviews

"A tasty, food-oriented mystery, enriched with a handful of recipes. Amateur detective and restaurateur Sally Solari has to juggle the hectic life of restaurant management and murder investigation in this savory sleuth-connoisseur’s delight!"
—Midwest Book Review