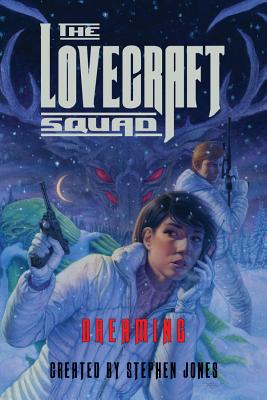 This is book number 3 in the Lovecraft Squad series.

The third volume in the new interconnected trilogy that reveals the origins of “The Lovecraft Squad”—a super-secret worldwide organization dedicated to battling the eldritch monstrosities given form in H. P. Lovecraft’s fevered imagination.

In his house at R’lyeh dead Cthulhu waits dreaming.

The Armies of the Night are rising. Such clandestine cults as the Olde Fellowes and the Esoteric Order of Dagon, who worship a group of ancient deities called the Great Old Ones, are harnessing occult powers to open the doorways to the Dreamscape and other dimensions beyond space and time.

Now something big is coming—something that is already sowing the seeds of madness and chaos into the psyche of the world—and only the agents of the Human Protection League stand between this rising tide of evil and the enslavement and eventual destruction of the human race itself . . .

Set against such historic events as the assassination of President John F. Kennedy, San Francisco’s “Summer of Love,” the first Moon landing, the rise of the Civil Rights Movement, and the Watergate break-in, the dedicated members of the Lovecraft Squad battle supernatural threats all across the world—and from beyond the stars.

Stephen Jones is one of Britain’s most acclaimed horror and dark fantasy writers and editors, with more than 140 books to his credit. He is a Hugo Award nominee and the winner of three World Fantasy Awards, three International Horror Guild Awards, four Bram Stoker Awards, twenty-one British Fantasy Awards, and a Lifetime Achievement Award from the Horror Writers Association. You can visit his web site at www.stephenjoneseditor.com or follow him on Facebook at Stephen Jones-Editor. He lives in London, England.

The authors—including Kim Newman, Stephen Baxter, and Michael Marshall Smith—have fun crafting a secret history of 20th-century America and using historical figures and clever inside references as critical commentary on the works of H.P. Lovecraft. Series fans will find this a satisfying addition.

A hugely enjoyable anthology. Jones has once again worked his magic as editor to pull together some of the best and most imaginative writers in the horror and cosmic horror genres to deliver original, engaging and chilling tales based around the Human Protection League shared universe.

One of our field’s most celebrated horror editors.