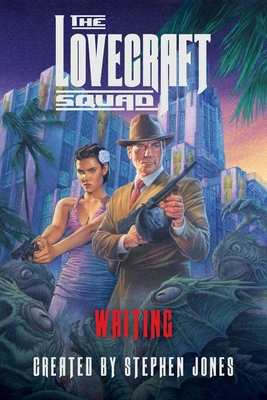 By Stephen Jones
Unavailable to Order
Out of Print

This is book number 2 in the Lovecraft Squad series.

The new book in the groundbreaking series that reveals the origins of "The Lovecraft Squad”—a super-secret worldwide organization dedicated to battling the eldritch monstrosities given form in H. P. Lovecraft’s fevered imagination.

In April 1936, Lovecraft’s novella The Shadow Over Innsmouth was first published. Written five years earlier, but oddly rejected by every magazine it was ever submitted to, it accurately described a series of events that actually happened in February 1928, when federal government agents raided the ancient Massachusetts seaport of Innsmouth and attempted to eradicate a deviant race of ichthyoid creatures which had been interbreeding with the human population for decades, if not centuries.

There was no way that the reclusive pulp writer could have known so much about a case where the details had been withheld for fear of creating a panic among the public. Following these startling revelations, the F.B.I. went back and investigated more closely into the stories that Lovecraft was publishing as “fiction.” Incredibly, it soon began to emerge that the events in Innsmouth were not a solitary event—and the monstrosities the author described really did exist.

To combat these cosmic horrors, the Human Protection League (H.P.L.) was established to investigate and combat these otherworldly invaders. Down through the decades since, the only defense that has stood between humanity and these creatures of chaos are the agents of the H.P.L.—or, as they are sometimes known to those few who are aware of their existence: The Lovecraft Squad.

Stephen Jones is one of Britain's most acclaimed horror and dark fantasy writers and editors, with more than 140 books to his credit. He is a Hugo Award nominee and the winner of three World Fantasy Awards, three International Horror Guild Awards, four Bram Stoker Awards, twenty-one British Fantasy Awards, and a Lifetime Achievement Award from the Horror Writers Association. You can visit his web site at www.stephenjoneseditor.com or follow him on Facebook at Stephen Jones-Editor. He lives in London, England.

"Jones has rounded up a host of science fiction, fantasy, and horror writers to contribute to a hard-boiled, shared-world riff on the writings of H.P. Lovecraft, master of eldritch horror. This book can best be appreciated by those already familiar with the Cthulhu mythos, but newbies will still enjoy the pulpy adventures of the league."
— Publishers Weekly

"One of our field’s most celebrated horror editors."
— Locus, The Magazine of Science Fiction and Fantasy [Praise for Stephen Jones]