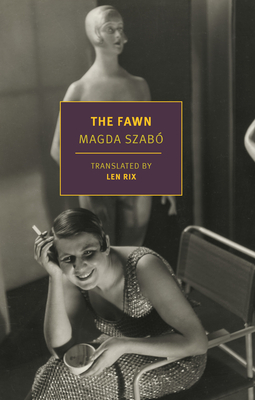 From the author of The Door and Abigail and for fans of Elena Ferrante and Clarice Lispector, a newly translated novel about a theater star who is forced to reckon with her painful and tragic past.

In The Door, in Iza's Ballad, and in Abigail, Magda Szabó describes the complex relationships between women of different ages and backgrounds with an astute and unsparing eye. Eszter, the narrator and protagonist of The Fawn, may well be Szabó’s most fascinating creation.

Eszter, an only child, her father an eccentric aristocrat and steeply downwardly mobile flower breeder, her mother a harried music teacher failing to make ends meet, grows up poor and painfully aware of it in a provincial Hungarian town.

This is before World War II, and Eszter, as she tells her story of childhood loneliness and hunger, has forgotten no slight and forgiven nobody, least of all her beautiful classmate Angela, whose unforced kindness to her left the deepest wound.

And yet Eszter, post-war—which is when she has come to remember all these things—is a star of the stage, now settled in Budapest, where Angela, a devout Communist married to an esteemed scholar and translator of Shakespeare, also lives.

The Fawn unfolds as Eszter's confession, filled with the rage of a lifetime and born, we come to sense, of irreversible regret. It is a tale of childhood, of the theater, of the collateral damage of the riven twentieth century, of hatred, and, in the end, a tragic tale of love.

Magda Szabó (1917–2007) is considered one of Hungary's greatest novelists. Her novels, dramas, essays, and poetry have been published in forty-two countries and in 2003 she was awarded the Prix Femina étranger for The Door. The NYRB Classics edition of The Door was selected as one of the The New York Times 10 Best Books of 2015. NYRB Classics also publishes Szabó's novels Iza's Ballad, Katalin Street, and Abigail.

Len Rix is a poet, critic, and former literature professor. In 2006, he was awarded the Oxford-Weidendfeld Translation Prize for his translation of Magda Szabó's The Door.