Because You'll Never Meet Me (Paperback) 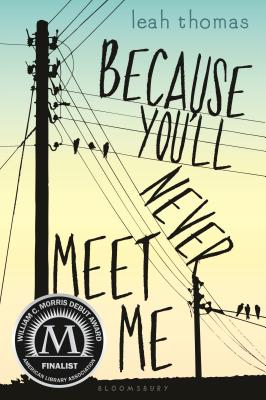 This is one of the most unique books I’ve ever read—in a good way. The entire story is a series of letters written by Ollie and Moritz, two teenage boys who are both isolated from society yet different in every other regard. Ollie, a carefree boy who wears his heart on his sleeve, is allergic to electricity and must live out in the boondocks of rural Michigan. Moritz, a blunt German who doesn’t mince words, has no eyes and a weak heart. He has a pacemaker which means that he and Ollie will never meet because remember, Ollie is allergic to electricity. Moritz can “see” by clicking his tongue, a practice called echolocation. What’s so beautiful about this borderline science fiction story is how these two journey from total strangers to lifelong friends. Thomas’s YA debut of friendship and destiny is stunning and unforgettable.

In an acclaimed literary debut, two boys on opposite ends of the world begin an unlikely friendship that will change their lives forever.

Ollie and Moritz are best friends, but they can never meet. Ollie has a life-threatening allergy to electricity, and Moritz's weak heart requires a pacemaker. If they ever did meet, they could both die. Living as recluses from society, the boys develop a fierce bond through letters that become a lifeline during dark times--as Ollie loses his only friend, Liz, to the normalcy of high school and Moritz deals with a bully set on destroying him. But when Moritz reveals the key to their shared, sinister past that began years ago in a mysterious German laboratory, their friendship faces a test neither one of them expected.

Narrated in letter form by Ollie and Moritz--two extraordinary new voices--this story of impossible friendship and hope under strange circumstances blends elements of science fiction with coming of age themes, in a humorous, dark, and ultimately inspiring tale that is completely unforgettable.

Leah Thomas frequently loses battles of wits against her students and her stories. When she's not huddled in cafes, she's usually at home pricking her fingers in service of cosplay. Leah lives in San Diego, California and is the author of Nowhere Near You and the William C. Morris YA Debut Award finalist, Because You'll Never Meet Me.

"The pacing is impeccable, as letters move from sunniness (Oliver) and bemused distance (Moritz) to both writers exploring their darkest fears, experiences, and worries for their futures." —starred review, BCCB

"A witty, unusual take on friendship and parlaying weakness into power." —Kirkus Reviews

"Ollie and Moritz are memorable characters with engaging and often humorous voices. . . A quirky, almost whimsical feel even as Thomas grounds it in heartfelt and often painful emotion." —School Library Journal

"The two may be eccentric outcasts, but their conflicts, heartbreak, and eventual bond form a relatable and engaging narrative." —Publishers Weekly

"This semi-sci-fi Bildungsroman has some surprising twists and turns--well worth the suspension of disbelief it requires." —VOYA

"It’s the distinct, deeply memorable voices of Ollie and Moritz that make this novel an affecting page-turner." —Horn Book Magazine