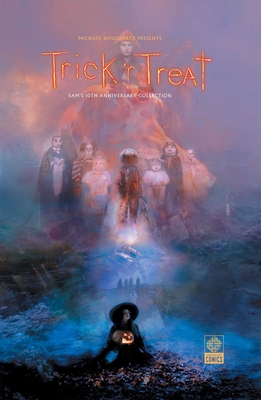 Michael Dougherty's "Trick 'r Treat" is arguably the greatest horror anthology movie since Stephen King's "Creepshow," and Sam (Samhain), the monstrous little trickster and enforcer of the rules of Halloween, has become a modern horror icon. Ten years after it was first released, the art in this graphic novel adaptation has been gloriously restored, and collected in a beautiful new hardcover edition, which also includes all the later tales of Sam's wicked adventures. The black-humored, twisted tales are reminiscent of EC Comics' "Tales from the Crypt," where well-deserved revenge is a dish best served cold, and undead trick-or-treaters, werewolves, and Sam all feast on the meal. I've waited years for this collection to rise from the grave, and the magnificent result was well worth the wait. It's perfect for those who keep Halloween in their hearts all year long!  – R.J. Crowther Jr.

Trick ‘r Treat, the graphic novel adaptation of the film, reveals 4 evocatively illustrated tales of horror interwoven into one unforgettable Halloween night as the unsettling figure known as Sam pays a visit to an unsuspecting community, wreaking havoc during the scariest night of the year.

And then in Days of the Dead, franchise icon Sam takes readers on a journey back through Halloween history with 4 chilling new Trick ‘r Treat tales. Discover old-world lovers whose romance takes a chilling turn and Western pioneers who discover the dark side of the frontier. Travel to 1950s Los Angeles for a tale of pure horror noir and into the heart of small-town America to see some pranksters taught a lesson they’ll never forget. Across centuries of Halloween horror, wherever fear lies, Sam will be waiting…

This new deluxe edition features all-new cover art, and brings all of Sam’s stories together into one collection for the first time. No tricks, just treat after treat for horror fans!