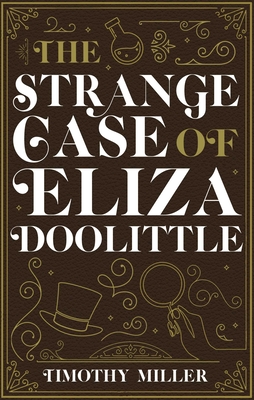 Sherlock Holmes has retired to the Sussex countryside . . . that is, until a most formidable puzzle is dropped upon his doorstep by a certain Colonel Pickering.

One Miss Eliza Doolittle, once nothing more than a cockney guttersnipe, has been transformed into a proper lady of London—perhaps even a duchess?—as if overnight. When Col. Pickering recovered from a bout of malaria, he was astounded at the woman before him. Is it possible this transformation is due to nothing more than elocution lessons and some splendid new hats? Or has Professor Henry Higgins surreptitiously traded one girl for another? And for God’s sake, why?

As the case unfolds, Holmes and Watson find themselves in ever stranger territory. Who are the four identical “Freddies” pursuing Miss Doolittle? What part do the respected Dr. Jekyll and his malevolent associate, Mr. Hyde, long thought dead, have to play in this caper? And who the devil is the devilish Baron von Stettin?

The Strange Case of Eliza Doolittle is an enthralling escapade starring some of Victorian literature’s most beloved characters—a historical mystery that will leave you delighted, perplexed, and positively bewildered.

is a native of Louisiana, and a graduate of Loyola University in New Orleans. He has directed and designed lighting for plays in New Orleans and Chicago. The feature film of his screenplay At War with the Ants won a Silver Remi Award at Houston’s Worldfest. His screenplays have placed in several contests, including five times as a semifinalist in the Academy’s prestigious Nicholl Fellowship. He has taught English in Milan and has written for the Italian design magazine Glass Style. When not mourning over his beloved New Orleans Saints, he is mourning over his beloved Chicago Cubs. His favorite superhero is Underdog.

Full of surprises sure to satisfy any Holmes aficionado, and the ending is quite affecting.
— Historical Novel Society