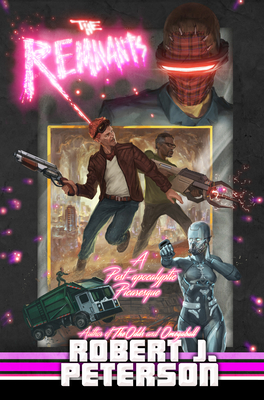 By Robert J. Peterson
Unavailable to Order
Out of Print

Peterson's weirdly fascinating environment will appeal to fans of epic world building, and the generous dose of ribaldry in the story is a welcome treat.
--Booklist
The apocalypse happened, but no one knows how. All that's left are a smattering of bizarro cities called remnants, each ruled by a grotesque potentate known as an Odd. If you wind up in hock to the Odds, they ship you to a chain-gang that stretches thousands of miles across desert, steppe, and tundra. A good-hearted drifter named Eldridge is a longtime member of the Chain. Known as the "Red Rook" because of his triumph in the Xiang Tournament of 2603--a battle royale of live-action battle chess--Eldridge nevertheless wound up on the Chain because...well, he's always getting in trouble trying to help his friends. But when El's best buddy Boris joins the Chain, he brings word that the Odds have declared war on their friends, each of them being held captive by a different Odd in a different remnant. Eldridge and Boris escape the Chain, kicking off a breakneck tour of a psychedelic post-apocalyptic landscape that includes a wild race along a subterranean river of mud; a visit to remnant that's like a massive ant colony; and a final showdown in a skyscraper-turned-temple that's toppled along a river of lava.

Robert J. Peterson is a writer and web developer living in Los Angeles. A Tennessee native, he graduated from Northwestern University's Medill School of Journalism. He's written for newspapers and websites all over the country, including Welcome to Twin Peaks, the Marin Independent Journal, PerformInk, Space.com, the Telluride Daily Planet, and Geekscape.net. In 2004 he co-founded the pop-culture emporium CC2KOnline.com. He's appeared on the web talk shows Screen Junkies TV Fights, Collider Heroes, Comics on Comics, The Fanboy Scoop, Geekscape, and Fandom Planet. He's the founder of California Coldblood Books and the author of two previous novels, the YA sci-fi thriller Omegaball, and The Odds, Book One of the Deadblast Chronicles. An audio drama based on The Odds is set to debut in 2019. His friends call him Bob.