Black and White-Wrong and Right: A True Love Story from South Central (Paperback) 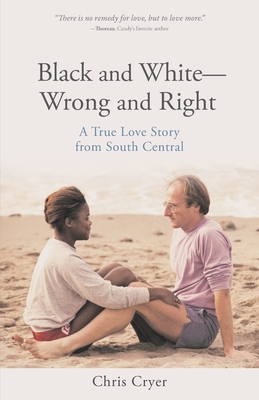 True love tested by racial, cultural, and systemic attack. A story that makes you fall in love with love.

Save your tears-It's a better world since Candy and Gabe. This is a true story of a 17-year-old, tough-minded, female sprinter and her 27-year-old, soft-hearted, male coach who, though opposite in terms of class, race, and age, run smack into each other's hearts. Smarter, cleverer, and stronger than their early 80's peers in depressed South Central LA, she runs on and he coaches their Jefferson High track team, of course, to glory.

Breaking custom and law, they face repudiation, misunderstanding, and controversy. They confront: the courts, the school board, a violent racist group, peers and family. How they survive and build a happy, lifelong, nationally famous family of activists is a gripping story and a miracle of love.

QUOTES ABOUT CANDY AND GABE:

"This couple's vision amazingly defeated everything our roughest neighborhoods threw at them. It's not only Candy's talent but their inner spark that saved them." -Ferial Masry, LA urban Cleveland High history teacher and ABC News Person of the Week

"Candy, you have balls." -Rita Moreno, in conversation with Candy 1991 about her new Interrace magazine

"Mills and Grosz want their children to define for themselves who they want to be." -Time Magazine, Fall 1993

"This magazine is saying it's all right to be different. It's a celebration of the human race, of racial diversity." -Interrace magazine, Candy and Gabe's own publication 1989

"This book is more than a good read. In the midst of racism and polarization, the power of love holds out, surviving cruelty, racism, and ethnocentrism. It's Dr. King's dream-the peace of Black and White together." -Ola Washington, Ventura College African American Studies Instructor