To Catch a Witch: A Wishcraft Mystery (Mass Market) 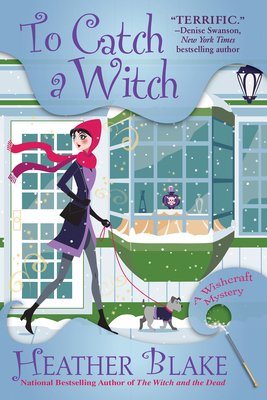 This is book number 8 in the A Wishcraft Mystery series.

Wishcrafter Darcy Merriweather might be a witch with the ability to grant wishes for others, but wishing isn’t going to help her catch a killer...

When wishcrafter Darcy Merriweather’s personal concierge company is hired by elite runner Abby Stillwell to organize the Wicked Mad Dash, a competition that takes place in the Enchanted Village, Darcy is more than willing to help her friend. As blizzard conditions rage on the morning of the race, Darcy’s main concern is the terrible weather—until Abby goes missing...and is later found dead, buried in the snow.

As Darcy investigates her friend’s untimely death, she learns that she didn’t really know Abby well at all. And those closest to the woman—her secret fiancé, her roommate, her ex-boyfriend, and her co-workers at Balefire Sports—seem to have plenty to hide too. As Darcy digs deeper, she uncovers complicated relationships, a possible embezzlement scheme, and allegations of cheating against a top athlete.

Just when Darcy is convinced she’s hit a dead end in the case, a startling burglary and the hunt for Abby’s elusive ex send Darcy down a dark, dangerous trail. It will take the help from friends, family, and a little bit of magic for Darcy to stop a stone-cold killer from striking again.

Heather Blake is the national bestselling author of the Wishcraft mysteries as well as the Magic Potion mysteries. She’s a total homebody who loves to be close to her family, read, watch cooking-competition TV shows, drink too much coffee, crochet, and bake cookies. Heather grew up in a suburb of Boston but currently lives in the Cincinnati area with her family.

Praise for To Catch a Witch:
“The latest in Blake's cozy/supernatural series contains enough fighting over in-groups and identities to be read on several levels, making it more prescient than many of its ilk.”
—Kirkus Reviews

“Always a joy, this incredible author returns with her eighth installment of the Wishcraft mysteries...If there was such a thing, Darcy Merriweather has definitely solidified her place in the Witch Hall of Fame.”
—Suspense Magazine

“A Witch Before Dying by Heather Blake is quite simply a fantastic read from cover to cover. It’s a magical tale, but it’s also a very human one, and it’s a perfect companion for the lazy, magical, seemingly endless days of summer.”
—The Season top pick on A Witch Before Dying

“A fun twist on typical witchy mysteries...with a delightful cast of characters.”
—The Mystery Reader on A Witch Before Dying

“Sparkling dialogue, colorful characters, and a clever plot!”
—Casey Daniels, Author of Supernatural Born Killers on It Takes a Witch

“Blake successfully blends crime, magic, romance, and self-discovery in her lively debut...Fans of paranormal cozies will look forward to the sequel.”
—Publishers Weekly on It Takes a Witch

“Heather Blake casts a spell on her audience.”
—The Mystery Gazette