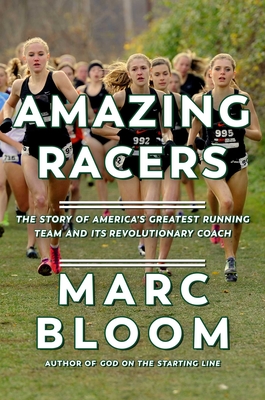 By Marc Bloom
Unavailable to Order
Out of Print

The inspiring, untold story about a group of remarkable athletes and their groundbreaking coach who live and train in startling ways—and are redefining running excellence in the United States.

What would one call taking teens with no evident running talent and putting them through breakneck training combined with mantras from the rock n' roll, techniques from Kenya, philosophy from Australia and turning them champions? Is it revolutionary? Or just plain crazy?

Bill Aris has heard both, but one thing is indisputable. Everything Aris does with his runners—male and female—is new and extraordinary, and he has created a new American running dynasty. The runners of Fayetteville-Manlius High School, or F-M, have won the last nine out of ten national championships and have the best cumulative record in cross country history. F-M's domination has shocked the sport for its defiance of accepted running principles and limitations. One year, the girls defeated the 2nd-place team in the country by an average of 59 seconds per girl in a 5k race. Another year, the F-M girls’ ran faster than their Kenyan counterparts, who had come to Oregon as a showcase. Across the country, top coaches all whisper, “How do they do it?”

From adopting long-forgotten Spartan creeds to focusing on teenaged developmental psychology and gender-blindness in training, Amazing Racers is a a must read for millions of runners and the millions more who strive for better performance.

Marc Bloom is an award-winning track and field journalist. He is a senior writer for Runner's World magazine and the author of six books. He lives in Princeton, New Jersey.

"Bloom pulls back the curtain on this wondrous team. An illuminating narrative with cultural power and unflinching love."
— Amby Burfoot

"Who would think that the story of an upstate New York high school coach and his young runners could be so inspiring! Marc Bloom gives us a beautiful exploration of the meaning of success in running—and in life. Amazing Racers tells us how we can perform at a higher level than we ever imagined."
— George A. Hirsch, chairman of the New York Road Runners, a founder of the New York City Marathon, and former worldwide publisher of RUNNER'S WORLD

"Bloom, the oracle of high school cross-country, gives Aris and the F-M team the treatment they merit given their astounding success. Bloom's attention to detail allows us to understand for the first time how Aris adapts his cherished 'Stotan' philosophy to create a culture of success. Bravo!"
— Craig Masback, former CEO, USA Track and Field, NBC-TV track and marathon commentator

"An engaging portrayal of an idiosyncratic coach, his stout-hearted athletes, and the wonder of powerful running. Marc effectively shows how a coach holds a mirror up to his harriers, pushing and pulling them to train with diligence, and how to find the freedom, beauty, and strength in their pursuits. Along the way, they discover truths about themselves and, best of all, a life-long love of running. "
— Lynn Jennings, three-time World Cross Country Champion and Olympic Bronze medalist

"Bloom captures all the ingredients for a magical journey into why running remains such an integral part of the American experience. Bloom brings depth and dimension to this intimate and enthralling story. If running is part of your life psyche, Amazing Racers will only enhance that treasured lifeline."
— Neil Amdur, former NEW YORK TIMES sports editor and running corresopndent

"An inspiring illumination of a sensational team. Bloom's consistent and sincerely awestruck tone drives home just how special this story is, celebrating both the dedicated young athletes and their leader. His close reading of races, often called in heart-racing play-by-plays, is supplemented by research in sports physiology and psychology, and the history of cross-country racing."
— Shelf Awareness

"A captivating story of a longtime coach with a unique vision. Bravo to Bloom for sharing this story of a running dynasty and the man behind the program. A must-read for cross-country runners."
— Booklist