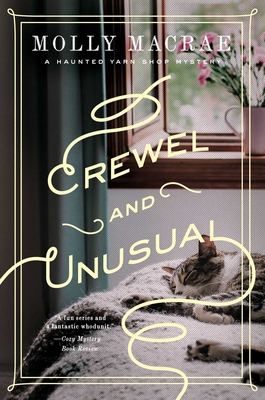 The latest mystery in this charming mystery series finds the ever-resourceful Kath Rutledge and shop ghost Geneva tangled up in an embroidery rivalry—and a murder.

Yarn shop owner Kath Rutledge is looking forward to the grand opening of the Blue Plum Vault, a new co-op of small shops, but in the week before the grand opening, two of the new shopkeepers, Nervie and Belinda, declare each other’s embroidery patterns and antique embroidered linens fakes, copies—and stolen goods. Kath is caught in the middle when she’s asked to use her textile expertise to decide if there’s any truth to the accusations.

Then, the day before the grand opening, an exquisite tablecloth that Kath has fallen in love with—the pride of Belinda’s shop—is found cut to shreds. Belinda accuses Nervie of the outrage, but Nervie has an airtight alibi: she was at Kath’s shop, the Weaver’s Cat, teaching a crewel embroidery class.

Despite worries over the rivalry and vandalism, the opening is a success—until Belinda is found dead, stabbed in the back with a pair of scissors from the Weaver’s Cat. Geneva, the ghost who haunts Kath’s store, claims she saw the murderer leaving the scene of the crime. But the ghost is the ultimate unreliable witness—only Kath and her shop manager can see or hear her. That means it’s up to Kath, TGIF, and especially Geneva the ghost to solve the crime before the killer cuts another life short.

Molly MacRae is the national bestselling author of Plaid and Plagiarism, Scones and Scoundrels, Thistles and Thieves, and Heather and Homicide, all available from Pegasus Crime. Her short stories have appeared in Alfred Hitchcock Mystery Magazine for more than twenty years, and she has won the Sherwood Anderson Award for Short Fiction. Molly lives with her family in Champaign, Illinois.

"Though the series as a whole is great fun, combining needlework, a cat, a ghost, and food, this supercozy mystery can easily stand on its own. It's practically guaranteed that those who like this entry will want to read the entire series."
— Library Journal

"MacRae develops her characters, even the ghost, slowly and completely. Reading about Blue Plum is a joy in itself; the setting is stunning and MacRae captures the beauty and serenity very well. By book six, Blue Plum is a character all by itself; this makes reading about the inhabitants all the more fun."
— Reviewing the Evidence

"Murder with a dose of drollery."
— Boston Globe [praise for the Haunted Yarn Shop Mystery Series]