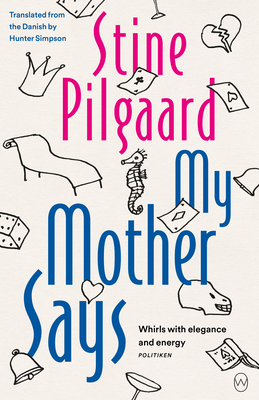 "A novel about getting over a broken heart without drowning in self-pity, but also a novel about language and communication, dialogue versus monologue, and community versus loneliness." ―Stavanger Aftenblad

The narrator's long-term girlfriend has just broken things off, forcing her to move back in with her father, a Pink Floyd-loving priest. While she desperately tries to convince her girlfriend to reconsider, the rest of the world bombards her with advice: from her childhood friend Mulle to her kindly therapist to her overbearing mother and card-playing father. Bumbling through the fog of disillusionment, the narrator gives herself permission to grieve, philosophize, and be generally outrageous until at last she sees a light at the end of the tunnel. My Mother Says is a compendium of conversations between people who talk past one another in a universe of misplaced good intentions. In this whirlwind of memories, confessions, temper tantrums, and declarations of love Pilgaard's sheer affection for her characters turns the pain of a broken heart into a heartwarming comedy of errors.