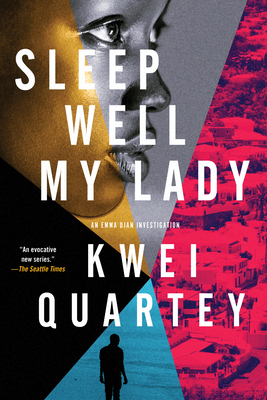 In the follow-up to the acclaimed series debut The Missing American, PI Emma Djan investigates the death of a Ghanaian fashion icon and social media celebrity, Lady Araba.

Hard-hitting talk show host Augustus Seeza has become a household name in Ghana, though notorious for his lavish overspending, alcoholism, and womanizing. He’s dating the imposing, beautiful Lady Araba, who leads a selfmade fashion empire. Fearing Augustus is only after her money, Araba’s religious family intervenes to break them up. A few days later, just before a major runway show, Araba is found murdered in her bed. Her driver is arrested after a hasty investigation, but Araba’s favorite aunt, Dele, suspects Augustus Seeza was the real killer.

Almost a year later, Dele approaches Emma Djan, who has finally started to settle in as the only female PI at her agency. To solve Lady Araba’s murder, Emma must not only go on an undercover mission that dredges up trauma from her past, but navigate a long list of suspects with strong motives. Emma quickly discovers that they are all willing to lie for each other—and that one may still be willing to kill.

Kwei Quartey is a crime fiction writer and retired physician based in Pasadena, California. Quartey was born in Ghana, West Africa, to a Ghanaian father and a Black American mother, both of whom were lecturers at the University of Ghana. His novel Wife of the Gods made the Los Angeles Times bestseller list in 2009. He has two mystery series set in Ghana: the Detective Inspector Darko Dawson investigations and the Emma Djan investigations. Follow him on Instagram @crimefictionwithkweiquartey or connect

Praise for Sleep Well, My Lady

“About to strangle an icon of the Ghanaian fashion industry, the killer in the second Emma Djan PI novel takes a moment to muse that the R&B music playing in the victim’s bedroom is 'a tasteful choice.' It’s the kind of weird but revealing character detail that the Ghanaian American Kwei Quartey specializes in. The sweetly crafty Emma is the main attraction here, but her colleagues at the Sowah detective agency are also a companionable bunch in this beautifully crafted tale.”
—The Washington Post

“Quartey’s work brings vivid life to his Ghanaian characters and setting, while reminding us that no matter the location, motivations for murder are the same everywhere.”
—CrimeReads

“Terrific . . . Stops at the morgue and a forensic lab, as well as an ongoing search for a unique murder weapon, contribute to the dark atmosphere. Along the way, Quartey skewers Ghanaian politics, religion, and the law. Smooth prose complements the well-wrought plot. This distinctive detective series deserves a long run.”
—Publishers Weekly, Starred Review

“An intriguing mystery that centers on the murder of a famous Ghanaian designer . . . Vividly invoking the noisy world of Accra, Ghana, Quartey has created a delightful character in Emma Djan, and a satisfyingly twisty mystery in Sleep Well, My Lady. Fans of Andrea Camilleri or Colin Cotterill are sure to enjoy Quartey's talented writing.”
—Shelf Awareness

“Armchair detectives, this one’s for you.”
—We Are Bookish

“Intimate . . . The law may believe that fashion mogul Lady Araba Tagoe was murdered by her chauffeur, Kweku-Sam, but her aunt, Dele Tetteyfio, isn’t having any of it . . . But the case turns out to be more complex than Auntie Dele imagines, and there’s no guarantee that she’ll be pleased with the results Emma and her colleagues dig up by assuming false identities and going undercover at every waking moment. A gripping setup, some workaday sleuthing, and a neatly turned solution.”
—Kirkus Reviews

“This engaging and well-developed mystery will appeal to readers looking for a solid police procedural with compelling characters and an international setting. The local culture is vivid, and a glossary at the end aids readers with unfamiliar words.”
—Library Journal

“Brilliantly executed . . . Quartey, also the author of the Darko Dawson series, is one of the strong voices in the current wave of African crime fiction.”
—Booklist

Praise for The Missing American