The Afterlife of the Party (Paperback) 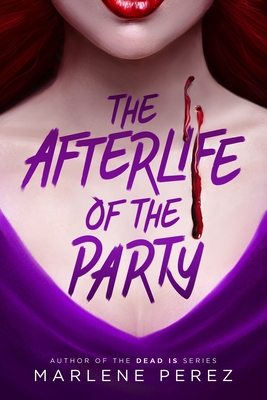 This is book number 1 in the Afterlife series.

I didn’t even want to go to the party. I just wanted to stay home with my librarian-witch grandmother and her mystical book club. But my best friend Skyler begged me. So I went.

I should have known there was something really strange about the band—especially when the lead singer bit me afterwards and then took off with my best friend.

Now I'm chasing down a band of dangerous vamps with my best guy friend, Vaughn. Who also happens to be the boy I’ve been secretly crushing on forever. And out on the road, anything can happen.

All I ever wanted was for things to change with Vaughn. For him to finally see the real me. But this isn’t exactly what I had in mind.

The Afterlife series is best enjoyed in order.
Reading Order:
Book #1 The Afterlife of the Party
Book #2 I'm with the Banned
Book #3 A Sucker for You

Marlene Perez is the author of paranormal and urban fantasy books, including the best-selling DEAD IS series for teens. The first book in the series, DEAD IS THE NEW BLACK, was named an ALA Quick Pick for Reluctant Young Adult Readers as well as an ALA Popular Paperback. The first three books in the series have been optioned by Disney for television.

She grew up in Story City, Iowa and is the youngest of twelve children. She lives in Orange County, California with her husband and children. Visit Marlene at www.marleneperez.com.