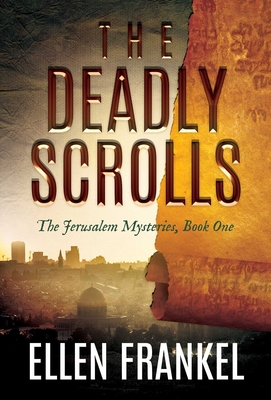 This is book number 1 in the The Jerusalem Mysteries series.

Set in modern Jerusalem and among the desert ruins of Qumran, this desperate hunt for an ancient treasure scroll pits a female Israeli intelligence agent against a religious fanatic hell-bent on bringing about the End of Days.

An American professor’s murder reveals his discovery of a lost Dead Sea Scroll, whose text encodes the secret hiding places of the lost Second Temple Treasures. Israeli intelligence agent Maya Rimon races against time to stop a religious extremist from launching a deadly terrorist attack at the next Blood Moon, triggering the Apocalypse in the holy city of Jerusalem.

The story centers around a genuine historical artifact, the so-called Copper Scroll, whose many secrets still remain undeciphered by contemporary scholars and treasure hunters. Despite decades of searching, not a single one of these invaluable treasures has ever been found.

Ellen Frankel served for eighteen years as Editor in Chief and CEO of The Jewish Publication Society. She received her BA from the University of Michigan and her PhD in Comparative Literature from Princeton.

She is the author of ten books, including The Classic Tales, The Encyclopedia of Jewish Symbols, and The Five Books of Miriam, which has been translated into Hebrew. Her JPS Illustrated Children’s Bible won the National Jewish Book Award. She has traveled widely as a Jewish storyteller and lecturer.

Frankel’s first opera, Slaying the Dragon, about the unlikely friendship between a KKK Grand Dragon and a rabbi, with music by Michael Ching, premiered in Philadelphia in 2012. Her opera, The Triangle Fire, with composer Leonard Lehrman, was performed in NJ and NYC in 2016 and 2017. Her newest work, Beyond the Binary, about artificial intelligence, with composer Andrea Clearfield, will premiere in Philadelphia in May 2022.

Frankel has previously published The Deadly Scrolls, Book 1 in The Jerusalem Mysteries series.

Frankel and her husband, Herb Levine, divide their time between Sarasota and Maine.

“In this thriller, Ellen Frankel has created a fine cast of Jerusalem types––corrupt antiquities hawkers, end-of-days preachers, scholars of the obscure past, and lost innocents abroad––but the true star is her detective, daring intelligence agent and conflicted single mom Maya Rimon. You won't stop turning the page.”
— Gershom Gorenberg, author of "War of Shadows: Codebreakers, Spies, and the Secret Struggle to Drive the Nazis from the Middle East"

“An exciting thriller from which one can learn a tremendous amount about the world of the Dead Sea Scrolls and the academic community that researches them.”
— Lawrence Schiffman: Judge Abraham Lieberman Professor of Hebrew and Judaic Studies at New York University and author of "Reclaiming the Dead Sea Scrolls"