The Pornography Wars: The Past, Present, and Future of America’s Obscene Obsession (Hardcover) 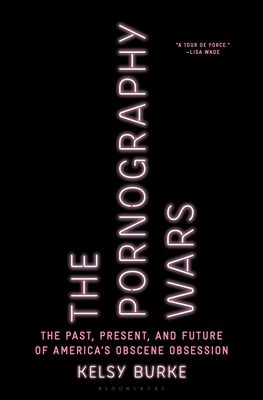 For readers of Peggy Orenstein and Rebecca Traister, an authoritative, big think look at pornography in all its facets - historical, religious, and cultural.

In the 1960s, sex researchers Masters and Johnson declared the end of the fake orgasm. Nearly two decades later, in 1982, evangelical activist Tim LaHaye foretold that the entire pornography industry would soon be driven out of business. Neither prediction proved true. Instead, with the rise of the internet, pornography saturates the American conscience more than ever and has reshaped our understanding of sexuality, relationships, media, and even the nature of addiction.

Sweeping, savvy, and deeply researched, The Pornography Wars is a necessary and comprehensive new look at pornography and American life.

Kelsy Burke is an award-winning sociologist and author of Christians under Covers. She has spent the last decade studying how people talk about sex in America and is currently an Associate Professor of Sociology at the University of Nebraska-Lincoln. Her work has been supported by multiple grants and fellowships, including an award from the National Science Foundation, and her writing has appeared in The Washington Post The Huffington Post, Newsweek, Salon, and Slate.

“A mature, thoughtful book about a complex and divisive topic. No matter their personal opinions, readers will likely find observations here to inform their thoughts about pornography's creation and consumption.” —Library Journal, Starred Review

“Thoroughly researched and refreshingly readable … this volume does a remarkable job of conveying points of view from all sides of the issues, resulting in a much more complex understanding of a lightning-rod subject.” —Booklist

“The Pornography Wars is a tour de force! Weaving together history, politics, science, and technology, Burke meticulously documents all sides of the pornography debates... always staying above the fray. If you want to be truly informed, this is where you start!” —Lisa Wade, author of AMERICAN HOOKUP

“Whether you believe pornography exploits or empowers those who engage in it, you'll enjoy how Kelsy Burke deftly blends storytelling and rigorous social science research to enlighten us on this complex and often taboo subject. The Pornography Wars is relevant to anyone who is concerned about the influence that pornography has on our culture and our lives, including parents, clinicians, educators, and researchers alike. A fascinating read!” —Ina Park MD, MS, Professor, UCSF School of Medicine and Author of STRANGE BEDFELLOWS

“In The Pornography Wars, Kelsy Burke offers a timely and insightful perspective on one of the world's most contentious topics. She uses careful research and details from numerous interviews to convey realities about anti-pornography and pro-pornography advocacy positions, all while remaining transparent and clear about her own position and analytic frame. The writing is rich, highly accessible, and often personal. This is a provocative, extraordinary, must-read.” —Emily Rothman, author of PORNOGRAPHY AND PUBLIC HEALTH

“A clear-eyed, engaging, and deeply-researched study of an industry and an argument we cannot afford to ignore.” —Amy Werbel, author of LUST ON TRIAL

“Kelsy Burke may have done the impossible. At a time when debates over pornography's production and consumption have never been more heated, Dr. Burke has written a book that combatants on either side of that fight would find accurate, fair, and enlightening. And that's because Dr. Burke invites both sides to explain their case. She interviews the activists, the experts, and the producers. She traces the history and crunches the numbers. Meticulously researched, yet sweeping in scope, The Pornography Wars is required reading for anyone interested in America's love-hate obsession with porn.” —Samuel L. Perry, co-author of THE FLAG AND THE CROSS and ADDICTED TO LUST