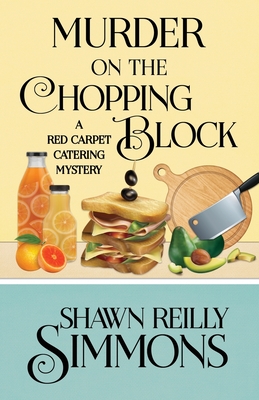 This is book number 7 in the Red Carpet Catering Mystery series.

Penelope Sutherland and her Red Carpet Catering Crew have landed in sunny California for their latest gig, a blockbuster action movie starring Sebastian Beauregard, the hottest new actor out of Australia. Movie industry buzz and the studio boss, Calvin Pope, a seasoned producer who's seen it all, say he's about to be the next big breakout star.

When a stunt gone wrong endangers the lives of everyone on the set, Penelope wonders if it was really an accident, or if someone was trying to snuff out that bright star.

When Calvin's wife goes missing in the middle of the night after a violent altercation with Calvin, Penelope she sets out to uncover a killer, who might be hiding in plain sight.

MURDER ON THE CHOPPING BLOCK by Shawn Reilly Simmons A Henery Press Mystery. If you like one, you'll probably like them all.