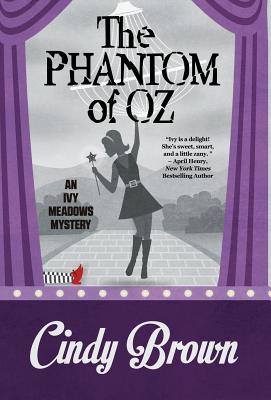 This is book number 5 in the Ivy Meadows Mystery series.

Creepy munchkins. A mysterious phantom. And a real Wicked Witch. Are you ready for it?

Actress and part-time PI Ivy Meadows has been hired to uncover the cause of the creepy accidents that plague the roadshow The Wizard: A Space OZpera and find out who dropped a chandelier on the Wicked Witch of the East.

Was it the ghost who haunts the Grand Phoenician Theatre? A "wicked witch" in the cast? Or is it someone--or something--more sinister?

It's Ivy's most personal case so far.

Her best friend Candy, who's touring with the show, is caught in a downward spiral of self-destruction, and is in more danger than she knows.

To save her friend and the show, Ivy must answer even tougher questions: Do spirits really exist? What is real beauty? What does friendship mean?

Ivy needs to learn the answers, and fast--before Candy reaches the point of no return.

THE PHANTOM OF OZ by Cindy Brown - A Henery Press Mystery. If you like one, you'll probably like them all.

Cindy Brown has been a theater geek (musician, actor, director, producer, and playwright) since her first professional gig at age 14. Now a full-time writer, she's the author of the Agatha-nominated Ivy Meadows series, madcap mysteries set in the off, off, OFF Broadway world of theater. Cindy and her husband live in Portland, Oregon, though she made her home in Phoenix, Arizona, for more than 25 years and knows all the good places to hide dead bodies in both cities.