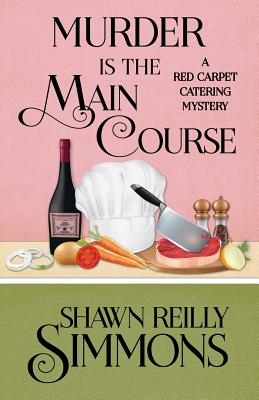 This is book number 4 in the Red Carpet Catering Mystery series.

Small Town. Big Secrets. Penelope and her Red Carpet Catering crew find themselves transported to a different world when they arrive on their newest movie set in rural Indiana. Surrounded by prickly locals, a nervous director out to prove herself, and a vast forest with secrets all its own, Penelope feels more homesick for the big city than ever before. When she finds their host, owner of Indiana's newest culinary hotspot, dead of an apparent suicide, Penelope works to uncover the darker truths boiling beneath the surface of his seemingly perfect life.

Asked to help keep the late chef's restaurant afloat, Penelope is fried trying to juggle two kitchens and a ravenous cast and crew. When the chef's suicide turns out to be murder, and the restaurant is vandalized in the middle of the night, Penelope must find out who is behind it all before she's the next one on the chopping block.

"Movie lovers, this is your book Engaging and high-spirited, Penelope Sutherland never expected that catering for the cast and crew of a top flight movie would lead to...murder. Great fun." - Terrie Farley Moran, Agatha Award-Winning Author of Caught Read-Handed

"This series is so well done that you will feel as though you have just gone to a friend's house to visit for a few hours." - The Reading Room

"Once in a while an author will come along who has a fresh voice; one who can take a tired genre and make it seem new again. Such is Ms. Simmons." - Any Good Book

Author Bio: Shawn Reilly Simmons is the author of The Red Carpet Catering Mysteries featuring Penelope Sutherland, an on-set movie caterer, and of the short story "A Gathering of Great Detectives" appearing in the upcoming Malice Domestic Anthology: Murder Most Conventional. Shawn was born in Indiana, grew up in Florida, and began her professional career in New York City as a sales executive after graduating from the University of Maryland with a BA in English. Since then Shawn has worked as a book store manager, fiction editor, convention organizer, wine consultant and caterer. She has been on the Board of Directors of Malice Domestic since 2003, and is a founding member of The Dames of Detection. Cooking behind the scenes on movie sets perfectly combined two of her great loves, movies and food, and provides the inspiration for her series.