Nun But the Brave (Paperback) 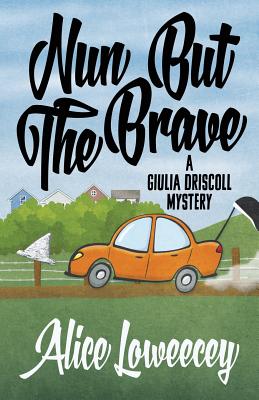 "Exciting and suspenseful." - Publishers Weekly (on Nun Too Soon) "In Nun But the Brave, the third in Alice Loweecey's page-turning Giulia Driscoll mystery series, Loweecy pulls off an incredible balancing act, whipping up the perfect blend of humor, suspense, and poignancy. I lost track of how many times this book made me laugh out loud, even as I rooted for Giulia and double-checked to make sure my doors were locked. Henery Press has a reputation for publishing great cozies, and Nun But the Brave is no exception " -Jess Lourey, Lefty-Nominated Author of the Murder by Month Mysteries "Giulia is a sympathetic, well-drawn character who has built a full life for herself after leaving the convent, but appealing touches of the former nun remain." - Booklist "Loweecey's characters are colorful without being caricatures, and once again we're lucky that Giulia Driscoll left the convent behind. She solves the crime with a happy mix of online savvy, humor and intelligence." - Sheila Connolly, New York Times Bestselling Author of An Early Wake "Loweecey is herself a former nun, and she brings to Giulia all of this inner conflict, residual guilt, and disillusionment...and how can you not love an author who quotes from the movies Airplane and Young Frankenstein? Giulia's recent marriage adds a delightful dash of romance, but the real appeal of this series is her genuine likability and fiery independent streak that could never be hidden behind a veil." - Kings River Life Magazine Giulia Driscoll's sister-in-law barges into Driscoll Investigations and promptly passes out from OD'ing on an unknown drug. Two OD'd teenagers are found dead in the park and behind a convenience store. DI's new client insists her missing twin sister is not dead and enlists Giulia as the "Missing Person Whisperer." Hooray for steady work? The missing sister's trail leads to married, pregnant, ex-nun Giulia's first experience with online dating sites, to the delight of her husband and employees. Those dates lead her to local Doomsday Preppers. They grow their own everything, and that everything may be connected to the drugs, her sister-in-law, and the missing twin. These Preppers are about to learn the true meaning of doom. Related subjects include: cozy mysteries, women sleuths, murder mystery series, whodunit mysteries (whodunnit), humorous murder mysteries, book club recommendations, private investigator mystery series. Books in the Giulia Driscoll Humorous Mystery Series: -CHANGING HABITS (prequel short story) -NUN TOO SOON (#1) -SECOND TO NUN (#2) -NUN BUT THE BRAVE (#3) -THE CLOCK STRIKES NUN (#4) May 2017 Part of the Henery Press Mystery Series Collection, if you like one, you'll probably like them all... Author Bio: Baker of brownies and tormenter of characters, Alice Loweecey recently celebrated her thirtieth year outside the convent. She grew up watching Hammer horror films and Scooby-Doo mysteries, which explains a whole lot. When she's not creating trouble for Giulia Driscoll, she can be found growing her own vegetables (in summer) and cooking with them (the rest of the year).