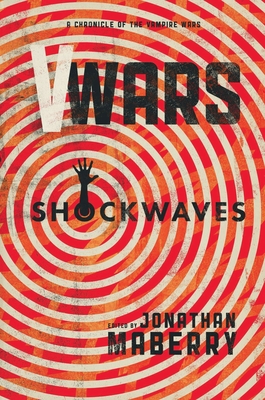 This is book number 4 in the V-Wars series.

The Vampire Wars are raging. We're all infected. Anyone can turn at any time. Your ally one minute could be at your throat the next. Or you go suddenly crave their blood.

Jonathan Maberry is a New York Times best-selling and multiple Bram Stoker Award-winning suspense author, editor, comic book writer, magazine feature writer, playwright, content creator, and writing teacher/lecturer. He was named one of Today’s Top Ten Horror Writers. His books have been sold in more than two-dozen countries.
Among his numerous book and comic credits are the shared-world anthologies V-Wars and its sequels, V-Wars: Blood & Fire, V-Wars: Night Terrors, and V-Wars: Shockwaves; the X-Files short story anthologies The Truth Is Out There, Trust No One, and Secret Agendas; the V-Wars comic series; and the comic series adaptation of his zombie novel Rot & Ruin; all from IDW Publishing.

John Dixon’s debut novel, Phoenix Island, and its sequel, Devil’s Pocket, won back-to-back Bram Stoker Awards and inspired the CBS TV series Intelligence. A former boxer, teacher, and stone mason, John lives in West Chester, PA, with his wife, their daughter, and a freeloading dog. When not reading or writing, he obsesses over boxing, chess, and hot peppers.

John Skipp is a Renaissance mutant: New York Times best-selling author and editor-turned-filmmaker. His latest books include The Light at the End (with Craig Spector) and The Art of Horrible People. He is also the editor and curator of Fungasm Press.

Nancy Holder is a multiple award-winning, bestselling author. She has sold over eighty novels, and one hundred short stories. She grew up in cities all over the world and now lives in San Diego with her daughter, two corgis, and three cats.

Weston Ochse is a former intelligence officer and special operations soldier who has engaged enemy combatants, terrorists, narco smugglers, and human traffickers. His military sci-fi series has been praised for its PTSD-positive depiction of soldiers at peace and at war. Weston likes to be called a chaotic good paladin and challenges anyone to disagree. A writer of more than 26 books in multiple genres, his supernatural military series SEAL Team 666 has been optioned for film. He is married to writer Yvonne Navarro.