Ill Met By Murder: A Shakespeare in the Catskills Mystery (Hardcover) 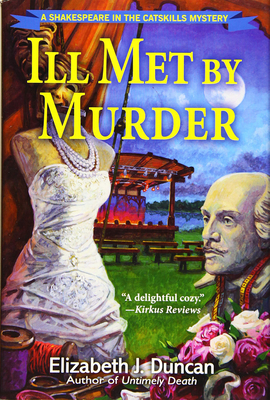 It's the most important night of the year for costume designer Charlotte Fairfax and the Catskills Shakespeare Theater Company—the annual fund raising performance at the country estate of the wealthy widow Paula Van Dusen. This year, the company will give a moonlight performance of A Midsummer Night's Dream as part of the wedding celebrations for Paula's daughter, Belinda, and her fiance Adrian. But then Hugh Hedley, family friend of the Van Dusens and Adrian's rival in the cutthroat world of high-end Manhattan real estate, is found murdered with a stolen prop from the play.

Paula, desperate to keep her daughter's name of out of the paper, enlists Charlotte's help, despite the fact that Charlotte's already got her hands full amidst her costume design responsibilities and finding a home for the company's new theater school. But Charlotte nevertheless throws herself into an investigation of shady business deals, a missing dog, and long buried family secrets because "though she be but little, she is fierce!" Ill Met by Murder, the second in Elizabeth J. Duncan's compelling mystery series, will satisfy every Shakespeare and mystery lover alike.

Elizabeth J. Duncan is the author of the beloved Penny Brannigan mystery series set in North Wales. A former editor and broadcaster in England, Elizabeth is currently an instructor at the Humber School for Writers in Ontario, Canada. This is her ninth mystery and the second Shakespeare in the Catskills mystery.

Praise for Ill Met by Murder:

"Duncan fans are sure to enjoy this cozy."
—Publishers Weekly

"Duncan’s second Catskills mystery is a delightful cozy with plenty of interesting characters and a touch of midlife romance."
—Kirkus Reviews

“Creative, delightful...This new tale is just as good as the previous one, and proves that these Shakespeare mysteries are going to be a whole lot of fun to follow.”
—Suspense Magazine

“Duncan brings interesting characters to the mystery stage while including plenty of theatrical details to charm the stage-oriented cozy readers. Ill Met by Murder is a great gift to find under the tree this Christmas.”
—Noir Journal

SHORTLISTED FOR THE 2016 BONY BLITHE AWARD

"What could have more charm than a cozy set in the Catskills?...Duncan drops just enough clues and red herrings to keep the reader guessing whodunit to the end."
—Publishers Weekly

"Duncan introduces a charming new sleuth and plenty of quirky characters sure to appeal to her base and to cozy fans in general."
—Kirkus Reviews

"Sympathetic, well-drawn characters and fascinating details on Shakespeare’s plays and costume design add to what is a satisfying mystery."
—Booklist

"An impressively crafted mystery that is a fully absorbing and inherently fascinating read from beginning to end...very highly recommended."
—Midwest Book Review

"Fans of Louise Penny will love this book."
—RT Reviews on A Brush with Death

"Sure to appeal to fans of M.C. Beaton and Agatha Christie."
—Library Journal on A Brush with Death

"Right up there with the best."
—Kirkus Reviews on A Brush with Death

"A really good British cozy...With lots of action and local color, Duncan’s book is a perfect spring getaway."
—The Globe and Mail on Slated for Death