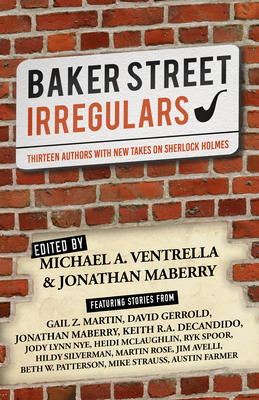 Thirteen authors, including Gail Z. Martin, David Gerrold, and Jonathan Maberry, come together to pen short stories innovating Sherlock Holmes, adapting and revolutionizing the iconic character. Sherlock Holmes is one of the most iconic and lasting figures in literature. His feats of detection are legendary, and he continues to capture audiences today in stories, movies, and on TV. In this new anthology, Baker Street Irregulars, authors present the celebrated detective in more than a dozen wildly entertaining new ways. In Ryk Spoor's thrilling The Adventures of a Reluctant Detective," Sherlock is a re-creation in a holodeck. In Hildy Silverman's mesmerizing A Scandal in the Bloodline," Sherlock is a vampire. Heidi McLaughlin sends Sherlock back to college, while Beth Patterson, in the charming Code Cracker," turns him into a parrot. The settings range from Russia in the near-future to a reality show, from a dystopian world to an orchestra. Without losing the very qualities that make Sherlock so illustrious a character, these authors spin new webs of mystery around their own singular riff on one of fiction's truly singular characters. Stories In This Volume:
'Locked by Mike Strauss
Identity (An Adventure of Shirley Holmes and Jack Watson) by Keith R. A. DeCandido
The Scent of Truth by Jody Lynn Nye
The Adventure of the Reluctant Detective by Ryk Spoor
A Scandal in the Bloodline by Hildy Silverman
The Fabulous Marble by David Gerrold
The Scarlet Study by Jim Avelli
Delta Phi by Heidi McLaughlin
Beethoven's Baton by Austin Farmer
The Adventure of the Melted Saint by Gail Z. Martin
Automatic Sherlock by Martin Rose
The Hammer of God by Jonathan Maberry
Code Cracker by Beth W. Patterson.