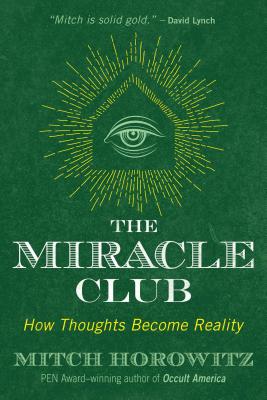 • Offers a concise, clear formula of focused exercises and concrete tools to lay out a specific path to manifest your deepest desires

Following in the footsteps of a little-known group of esoteric seekers from the late-nineteenth century who called themselves “the Miracle Club,” Mitch Horowitz shows that the spiritual “wish fulfillment” practices known as the Law of Attraction, Positive Thinking, “the Secret,” and the Science of Getting Rich actually work. Weaving these ideas together into a concise, clear formula, with real-life examples of success, he reveals how your thoughts can impact reality and make things happen.

In this “manual for miracles,” Horowitz explains how we each possess a creative agency to determine and reshape our lives. He shows how thinking in a directed, highly focused, and emotively charged manner expands our capacity to perceive and transform events and allows us to surpass ordinary boundaries of time and physical space. Building on Neville Goddard’s view that the human imagination is God the Creator and Ralph Waldo Emerson’s techniques for attaining personal power, he explores the highest uses of mind-power metaphysics and explains what works and what doesn’t, illuminating why and how events bend to our thoughts. He encourages readers to experiment and find themselves “at the helm of infinite possibilities.”

Laying out a specific path to manifest your deepest desires, from wealth and love to happiness and security, Horowitz provides focused exercises and concrete tools for change and looks at ways to get more out of prayer, affirmation, and visualization. He also provides the first serious reconsideration of New Thought philosophy since the death of William James in 1910. He includes crucial insights and effective methods from the movement’s leaders such as Ralph Waldo Emerson, Napoleon Hill, Neville Goddard, William James, Andrew Jackson Davis, Wallace D. Wattles, and many others. Defining a miracle as “circumstances or events that surpass all conventional or natural expectation,” the author invites you to join him in pursuing miracles and achieve power over your own life.

Mitch Horowitz is a PEN Award-winning historian, longtime publishing executive, and a leading New Thought commentator with bylines in The New York Times, Time, Politico, Salon, and The Wall Street Journal and media appearances on Dateline NBC, CBS Sunday Morning, All Things Considered, and Coast to Coast AM. He is the author of several books, including Occult America and One Simple Idea. He lives in New York City.

"Treats esoteric ideas and movements with an even-handed intellectual studiousness that is too often lost in today's raised-voice discussions."
— Washington Post

“The most honest and insightful book on positive thinking to appear in decades—also the best.”
— Richard Smoley, author of The Deal: A Guide to Radical and Complete Forgiveness

“The American lineage of mind metaphysics, or positive thinking, takes a beating from both the religious right and the intellectual left, who seem to share in little other than this fear and loathing of the possibility that we might actually be able to imagine ourselves into other realities, histories, and humanities. This same tradition has recently lacked a real intellectual voice willing to answer these too-certain critics and tackle some of the most difficult questions around this astonishing possibility, including the problem of suffering and just how this might all work. Not anymore. Enter Mitch Horowitz. Enter The Miracle Club. I wish every leader in the human-potential movement would read this book.”
— Jeffrey J. Kripal, J. Newton Rayzor Professor of Religion at Rice University

“At a time when quantum physicists dare to say things like, ‘Our intentions in the future create the past causes of the present,’ a reappraisal of spiritual beliefs (and philosophical theories in general) is clearly in order. It is such a critical assessment that Mitch Horowitz proposes in this book: the values and visions that inspired America assumed that ‘greatness’ should be measured not only in terms of material riches but of human progress. The lesson is important and timely.”
— Jacques Vallée, computer scientist, venture capitalist, and author of The Edge of Reality

“It is rare that I find a book that still strikes me as both fresh and true. Horowitz single-handedly reenergizes the New Thought genre, giving it a much-needed update. The Miracle Club moves the reader far beyond the simple promise of wealth and happiness; it moves us to consider what those words actually mean. The Miracle Club then gives readers the tools to begin building their lives anew and the wise conviction to create a genuine life which fulfills self-potential and serves others.”
— Regina Meredith, host of Open Minds and creator of ReginaMeredith.com

“As part of my scientific work, I study the relationship between mind and matter under strictly controlled laboratory conditions. I’ve found that those who laugh the loudest about the ‘power of affirmations’ will often ask me, but only after drinking a few beers and in hushed tones, ‘Seriously, do thoughts really influence reality?’ I respond by saying that based on the results of hundreds of published scientific experiments, it appears that yes, they really do. But that’s not what they want to know. They’re asking if their thoughts affect their reality in their everyday lives. To answer that question, there’s only one way to find out--try it yourself. For the clearest and most eminently rational description of exactly how to test the power of your thoughts, there is simply no better choice than Mitch Horowitz’s The Miracle Club.”
— Dean Radin, Ph.D.,author of Real Magic

“Mitch is a contemporary Diogenes without the cynicism, a Socrates minus the coyness, a Kierkegaard with a happier spirit, an everyman’s philosopher who roams freely among the world’s great ideas, especially those that have been forgotten, hidden, or otherwise dismissed. The world needs his voice and insights now more than ever.”
— Greg Salyer, president and CEO of the University of Philosophical Research

“An erudite and impassioned call for a deeper understanding of the positive-thinking movement. Mitch Horowitz, historian, scholar, and New Thought practitioner, states his case in this beautifully written and eminently practical book. A wonderful read for those familiar with the tenets of New Thought and those who are just embarking on its study and application.”
— Paul Selig, author of I Am the Word: A Channeled Text

“Mitch’s critical new thinking brings a welcome discipline and honesty to fields too often redolent of fool’s gold. One hopes both critics and advocates of New Thought read this book; they need to. But bring a knapsack. There’s more than a pocketful of miracles here.”
— Gary Lachman, author of Dark Star Rising

"Horowitz affirms that every human being has the innate ability to bend reality toward a particular result, and that we are always using this power for good or for ill whether we are aware of it or not. Encouraging exploration, he provides understanding, exercises, and tools to make our visualizations, affirmations, and prayers effective."
— Kristine Morris, Foreword Reviews

"Already hailed as a modern classic...Horowitz is among the most articulate and authoritative voices in the fields of alternative spirituality, occult and esoteric history...Horowitz comes across as the real deal: he is an authentic 'adept mind' and he knows his stuff."
— BoingBoing

"I hope you will enjoy this book as much as I have, and finish it with many pages of ideas and methods you have taken from it, ripe for trial and experience." Use the ideas you encounter, don’t simply establish a metaphysical bank account of possible future beneficial actions."
— Walter Mason, New Dawn Magazine