First Templar Nation: How Eleven Knights Created a New Country and a Refuge for the Grail (Paperback) 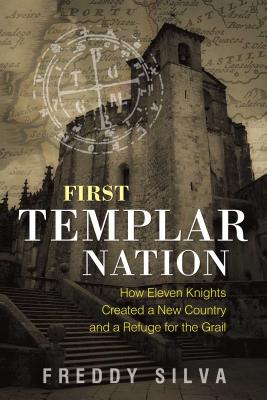 • Explains how and why the Templars created Europe’s first nation-state, Portugal, with one of their own as king

• Reveals the Portuguese roots of key founding members, their relationship with the Order of Sion, the Templars’ devotion to Mary Magdalene and John the Baptist, and the meaning and exact location of the Grail

• Includes over 700 references, many from new and rare sources

Conventional history claims that nine men formed a brotherhood called the Knights Templar in Jerusalem in 1118 to provide protection for pilgrims traveling to the Holy Land. Overturning this long-established historical narrative, Freddy Silva shows that the Order of the Temple existed a decade earlier on the opposite side of Europe, that the protection of pilgrims was entrusted to a separate organization, and that, in league with the Cistercian monks and the equally mysterious Order of Sion, the Templars executed one of history’s most daring and covert plans: the creation of Europe’s first nation-state, Portugal, with one of their own as king.

Including over 700 references, many from new and rare sources, Silva reveals Portugal, not Jerusalem, as the first Templar stronghold. He shows how there were eleven founding members and how the first king of Portugal, a secret Templar, was related to Bernard de Clairvaux, head of the Cistercians. The author explains the Templars’ motivation to create a country far from the grasp of Rome, where they could conduct their living resurrection initiation--whose candidates were declared “risen from the dead”--a secret for which the Church silenced millions and which the Templars protected to the death.

Placing the intrepid Knights in a previously unknown time and place, Silva’s historical narrative reveals the Portuguese roots of key founding members, their relationship with the Order of Sion, the Templars’ unshakeable devotion to Mary Magdalene and John the Baptist, and how they protected a holy bloodline in Portugal. He also provides evidence of secret Templar holy sites, initiation chambers, and hidden passageways throughout Portugal, often coinciding with pagan and Neolithic temples, and explains how their most important site forms a perfect triangle with the Abbey of Mont Sion in Jerusalem and the Osirion temple in Egypt. The author also reappraises the meaning of the Grail and reveals its exact location, hidden in plain sight to this very day.

Freddy Silva is a leading researcher of alternative history, ancient knowledge, sacred sites, and the interaction between temples and consciousness. He has appeared on Discovery Channel, BBC, and Coast to Coast AM radio. He is the author of 5 books and lives in Portland, Maine.

“In this well-told story, author Freddy Silva has filled a long-standing need for a real understanding of the Templars’ early history, their search for treasure in the Temple of Solomon, and the creation of an independent Portugal with a Templar knight as king. First Templar Nation is a fascinating contribution to the body of knowledge of the Order.”
— Steven Sora, author of The Lost Treasure of the Knights Templar