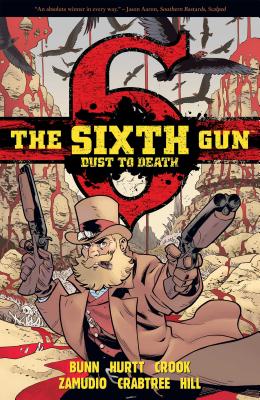 Two tales of THE SIXTH GUN! Two visions of the wild and weird west! Two stories of shamans, the Spirit World, magic pistols, and bounty hunters! Two quests that shape the lives of the heroes and villains of the greatest Old West Fantasy of all time! First, the reclusive witch Buzzard Wife gathers a Hunting Party for a treacherous journey into the fabled Valley of Death. Then, we follow Billjohn O'Henry on a heartbreaking adventure to save his beloved daughter. From the House of Death to a Wild West Medicine Show, these yarns take aim on heretofore unexplored realms of THE SIXTH GUN!

Brian Hurtt is an artist/writer who has spent most of his career working on collaborative creator-owned projects. His first such collaboration was in 2006 when Brian teamed with writer Cullen Bunn to create the Prohibition-era, monster-noir, cult classic, The Damned. A few years later the two teamed up again to create The Sixth Gun--a weird-west, epic supernatural fantasy. Spun out of that world, they're now collaborating on Shadow Roads. Brian also contributes to the popular webcomic Table Titans, in which he is the writer and artist of the stories "Whispers of Dragons" and "Road to Embers". Brian lives and works in St. Louis, Missouri. Brihurtt.com Twitter: @brihurtt