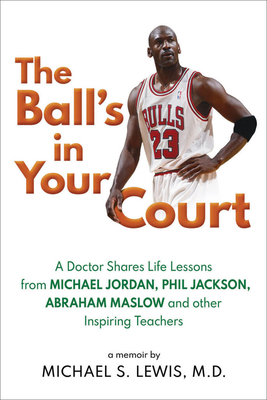 Michael S. Lewis, M.D., a Chicago Bulls orthopedic surgeon during their last two championship years, including "The Last Dance," takes readers behind the scenes to answer these questions. He shares life lessons and offers an intimate portrait of the many world-class athletes and inspiring teachers he has met during his career, including Michael Jordan, Phil Jackson, Bill Veeck, Wilbur Wood, Sir John Charnley and Abraham Maslow.

Michael S. Lewis is a physician, photographer and author.

Michael Lewis is an orthopedic surgeon at the Illinois Bone and Joint Institute. He has been Chief of Staff at NorthShore University HealthSystem, Skokie Hospital. He also was named best teacher of the year at Rush University Medical Center. He has also been an orthopedic consultant to the Chicago White Sox baseball team, the Chicago Wolves hockey team, and the Chicago Bulls basketball team, with whom he earned two championship rings. Dr. Lewis has been honored to treat numerous world-class athletes from several continents, including All-Star professional basketball and baseball players and Olympic medal winners. Being an avid tennis player, who has successfully competed at the national level in his age group, he understands how important active participation in their chosen activities is to his patients.

Michael Lewis started taking photographs more than forty years ago when he was stationed in the United Kingdom as an orthopedic surgeon in the United States Air Force. At that time he was able to travel throughout Europe, as well as East Africa, Nepal and India. Since then his passion for photography has grown exponentially.

Michael is honored that his images have been published in a number of books and magazines, including the Field Museum of Natural History Bulletin and Nature Photographer. During a one man show of his in a Chicago-area gallery, people reported that his work struck a deep chord in them, which led to the publication of One World: A View of Seven Continents. His photographs have since been shown in several galleries and exhibitions, including Brandeis University in Waltham, Massachusetts; the Moscone Convention Center in San Francisco, California; the Chicago Cultural Center in Chicago, Illinois; and Children’s Hospital of Harvard University in Boston, Massachusetts.

“I enthusiastically recommend this book. With insight and humor, Dr. Michael Lewis accurately captured our time together with the Chicago Bulls.”
-- Bill Wennington, member of the Chicago Bulls championship teams, 1996-1998

"Everyone wants a life filled with passion, adventure and love! This amazing book will bring you on a joyous journey, with Dr. Michael Lewis as your guide, to the essence of a life well lived."
-- Geoffrey Tabin, M.D., Professor of Ophthalmology, Stanford University and Director, Himalayan Cataract Project