A Catered Costume Party (A Mystery With Recipes #13) (Hardcover) 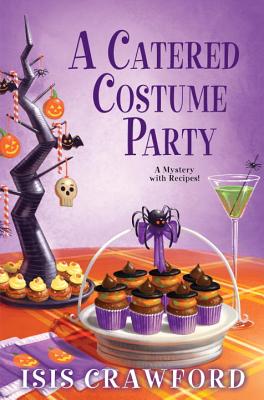 This is book number 13 in the A Mystery With Recipes series.

When sisters Bernie and Libby Simmons agree to cater an extravagant Halloween party in their little upstate New York town of Longely, they figured a ghost or two and a blood curdling scream might be part of the menu, but they never expected to be haunted by the deadly specter of murder . . .

Halloween is coming, and Darius Witherspoon isn’t giving up on his plan for a catered costume party—despite the recent disappearance of his wife, Penelope. He may be heartbroken, but perhaps throwing a big shindig in her honor will boost his spirits. He’s going to hold it at his stylish new co-op apartment at the Berkshire Arms, where the couple had dreamed of moving in.

Darius hires Bernie and Libby to provide the treats. They’d prefer to avoid the festivities altogether. As far as they’re concerned, the Berkshire Arms is a haunted house—or at least haunted by the memory of the murder that happened on the site, when it used to be The Peabody School. But as always, there are bills to be paid, so they accept the job. And in the midst of the celebration, Darius is discovered hanging from a noose outside one of the ballroom’s French doors . . .

Was it suicide, induced by despair over his missing spouse? Bernie and Libby think not, once they read the note he left—which includes a sum of money and a request for them to “do something” if anything should happen to him. Now, once the serving trays have been cleared and the decorations taken down, it’s time for the sisters to unmask a killer . . .

ISIS CRAWFORD was born in Egypt to parents who were in the diplomatic corps. When she was five, her family returned to the States, where her mother opened a restaurant in Upper Westchester County and her father became a university professor. Since then Isis has combined her parents’ love of food and travel by running a catering service as well as penning numerous travel-related articles about places ranging from Omsk to Paraguay. Married, with twin boys, she presently resides in Hastings-on-Hudson, New York, where she is working on the next Bernie and Libby culinary mystery. Readers can visit her website at www.isiscrawford.com.