A Catered Tea Party (A Mystery With Recipes #12) (Hardcover) 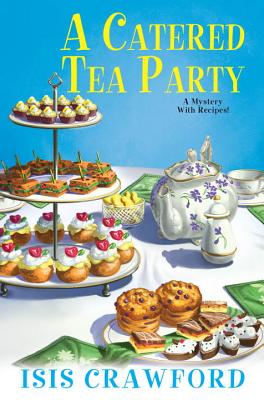 This is book number 12 in the A Mystery With Recipes series.

Quiet Longely, New York, is abuzz with excitement over the opening of a revamped art complex—and catering sisters Bernie and Libby Simmons are helping put on an elaborate tea party for the opening night gala fundraiser. But when the billionaire behind the project drops dead, the Simmons sisters find themselves steeped in a whistling kettle of murder . . .

Everyone in Longely is talking about Blue House, an art complex that will bring the town a theater, an art gallery, and even a restaurant and coffee bar. But they’re less than enthusiastic about Ludvoc “Zeb” Zalinsky, the self-made billionaire who’s funding the complex—and rubbing everyone the wrong way. Bernie and Libby reluctantly agree to cater the Alice in Wonderland themed tea party he’s planned, but it quickly becomes clear that Zeb is madder than the hatter he’ll be dressed as . . .

The night of the benefit arrives and Westchester’s finest show up in droves, having paid $500 apiece to attend Zeb’s meticulously-orchestrated tea party. But just when it seems the production is going according to plan, Zeb lifts an electric tea kettle, clutches his chest, and falls to the floor in fittingly dramatic fashion. The kettle shorted out and his pacemaker malfunctioned—but it doesn’t take long for police to decide that this seemingly random accident was actually cold-blooded murder . . .

As Bernie and Libby set out to find the culprit, they realize Zeb might have had more enemies than money. With so many possible culprits to sort through, only one thing is clear: Zeb was poured a steaming cup of revenge—and a second serving may be on the menu…

DELICIOUS PRAISE FOR ISIS CRAWFORD AND HER MOUTH-WATERING MYSTERIES!

A CATERED MOTHER’S DAY
“Cozy fans will find plenty to like.” —Publishers Weekly

A CATERED FOURTH OF JULY
“Framed with scenes of food preparation and sales, and supported by the richly portrayed relationship between the sisters and their widowed father, this satisfying cozy will appeal to fans of Joanne Fluke’s Hannah Swensen mysteries.” —Booklist

A CATERED MURDER
“Fans who love culinary mysteries are going to gain pounds after reading this delicious who-done-it.” —I Love a Mystery