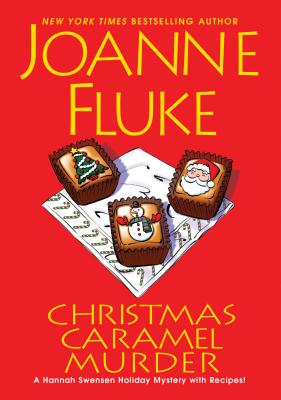 By Joanne Fluke
Unavailable to Order
Hard to Find

If there’s a body around, Hannah Swensen will find it. Mike, detective and friend, calls Hannah’s talent “slaydar.” The mayor’s former girlfriend Phyllis Bates is dead and the list of suspects includes Hannah’s dear friends. Lisa is jealous because her husband Herb is not coming home nights and Phyllis, his high school sweetheart, works closely with him. Herb, the absent husband, might not have liked the very unprofessional kiss Mrs. Clause gave him on stage. Especially when Mrs. Clause is Phyllis, and Lisa is in the audience. Are the philandering mayor and his very angry wife on the suspect list? With help from her mother and her good friend Norman, Hannah begins to investigate, interrogate, and poke into alibis. Will she be able to nose around and remain safe? Will there be a happy ending and a Merry Christmas? Will the reader have time to bake all the yummy recipes in the book? Read and bake with pleasure.

Christmas normally descends on Lake Eden, Minnesota, as gently as reindeer alighting on a rooftop--but this yuletide season the only thing coming down Hannah Swensen's chimney is a case of murder . . .

The holidays have arrived, and Hannah and her good pal Lisa have agreed to provide all the goodies for the town's annual production of A Christmas Carol. But before anyone can say "Bah, humbug " a Santa-sized sackful of trouble ensues. Like the fact that Lisa's husband will be playing Mr. Claus to his ex-girlfriend Phyllis Bates' Mrs. Claus. Or that before the curtains even go up Phyllis is found dead in the snow--wearing a costume that the real Mrs. Claus would put on the naughty list. Soon after the suspects pile up faster than snowdrifts in a blizzard, while a merry murderer remains on the loose. With clues even harder to find, it might take a visit from ghosts of Christmas past to wrap up this mystery in time for the holidays . . . Includes a Dozen Holiday Recipes from The Cookie Jar

JOANNE FLUKE is the New York Times bestselling author of the Hannah Swensen mysteries, which include Double Fudge Brownie Murder, Blackberry Pie Murder, Cinnamon Roll Murder, and the book that started it all, Chocolate Chip Cookie Murder. That first installment in the series premiered as Murder, She Baked: A Chocolate Chip Cookie Mystery on the Hallmark Movies & Mysteries Channel. Like Hannah Swensen, Joanne Fluke was born and raised in a small town in rural Minnesota, but now lives in Southern California. Please visit her online at www.JoanneFluke.com.